Saturday of the 1st Week in Ordinary Time 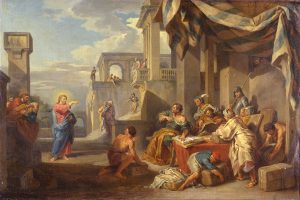 
9:1 There was a man of Benjamin whose name was Kish, the son of Abi’el, son of Zeror, son of Beco’rath, son of Aphi’ah, a Benjaminite, a man of wealth; 2 and he had a son whose name was Saul, a handsome young man. There was not a man among the people of Israel more handsome than he; from his shoulders upward he was taller than any of the people. 3 Now the asses of Kish, Saul’s father, were lost. So Kish said to Saul his son, “Take one of the servants with you, and arise, go and look for the asses.” 4 And they passed through the hill country of E’phraim and passed through the land of Shal’ishah, but they did not find them. And they passed through the land of Sha’alim, but they were not there. Then they passed through the land of Benjamin, but did not find them. 17 When Samuel saw Saul, the LORD told him, “Here is the man of whom I spoke to you! He it is who shall rule over my people.” 18 Then Saul approached Samuel in the gate, and said, “Tell me where is the house of the seer?” 19 Samuel answered Saul, “I am the seer; go up before me to the high place, for today you shall eat with me, and in the morning I will let you go and will tell you all that is on your mind. 10:1 Then Samuel took a vial of oil and poured it on his head, and kissed him and said, “Has not the LORD anointed you to be prince over his people Israel? And you shall reign over the people of the LORD and you will save them from the hand of their enemies round about. And this shall be the sign to you that the LORD has anointed you to be prince over his heritage.”


1 In thy strength the king rejoices, O LORD; and in thy help how greatly he exults! 2 Thou hast given him his heart’s desire, and hast not withheld the request of his lips. [Selah] 3 For thou dost meet him with goodly blessings; thou dost set a crown of fine gold upon his head. 4 He asked life of thee; thou gavest it to him, length of days for ever and ever. 5 His glory is great through thy help; splendor and majesty thou dost bestow upon him. 6 Yea, thou dost make him most blessed for ever; thou dost make him glad with the joy of thy presence.


13 He went out again beside the sea; and all the crowd gathered about him, and he taught them. 14 And as he passed on, he saw Levi the son of Alphaeus sitting at the tax office, and he said to him, “Follow me.” And he rose and followed him. 15 And as he sat at table in his house, many tax collectors and sinners were sitting with Jesus and his disciples; for there were many who followed him. 16 And the scribes of the Pharisees, when they saw that he was eating with sinners and tax collectors, said to his disciples, “Why does he eat with tax collectors and sinners?” 17 And when Jesus heard it, he said to them, “Those who are well have no need of a physician, but those who are sick; I came not to call the righteous, but sinners.”