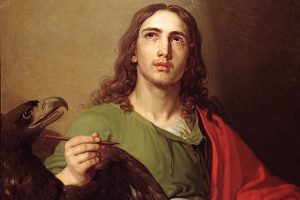 
1 The LORD reigns; let the earth rejoice; let the many coastlands be glad! 2 Clouds and thick darkness are round about him; righteousness and justice are the foundation of his throne. 5 The mountains melt like wax before the LORD, before the Lord of all the earth. 6 The heavens proclaim his righteousness; and all the peoples behold his glory. 11 Light dawns for the righteous, and joy for the upright in heart. 12 Rejoice in the LORD, O you righteous, and give thanks to his holy name!


1 Now on the first day of the week Mary Mag’dalene came to the tomb early, while it was still dark, and saw that the stone had been taken away from the tomb. 2 So she ran, and went to Simon Peter and the other disciple, the one whom Jesus loved, and said to them, “They have taken the Lord out of the tomb, and we do not know where they have laid him.” 3 Peter then came out with the other disciple, and they went toward the tomb. 4 They both ran, but the other disciple outran Peter and reached the tomb first; 5 and stooping to look in, he saw the linen cloths lying there, but he did not go in. 6 Then Simon Peter came, following him, and went into the tomb; he saw the linen cloths lying, 7 and the napkin, which had been on his head, not lying with the linen cloths but rolled up in a place by itself. 8 Then the other disciple, who reached the tomb first, also went in, and he saw and believed.

Reflection for the day: “‘A Child is born.’ To some He comes on this Christmas Day even in the remorse that follows, ‘There is no room…’; to some He comes when their hearts are saddened by a life that has been taken away and can be gladdened only by a Life that is given; to some, He comes when their hearts are like conscious mangers cry out ‘Lord, I am not worthy!’; to others, He comes as their study of science reminds them that the only star worth studying is the Star that leads to the Maker of the Stars; to others, He comes when their hearts are broken, that He might enter in and heal with wings wider than the world; to others, He comes in joy amidst the Venite Adoremus of the angels; to other He comes because they are so young they can never remember another Christmas – but to each and everyone He comes as if He had never come before in His own sweet way, He is the Child who is born. He, Jesus the Savior, He Emmanuel, He Christ at Christ’s Mass on Christmas.” — Venerable Fulton Sheen