Feast of the Holy Family of Jesus, Mary, and Joseph 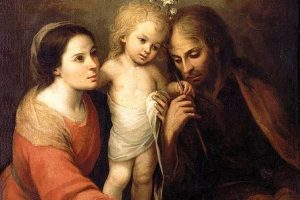 2 For the Lord honored the father above the children, and he confirmed the right of the mother over her sons. 3 Whoever honors his father atones for sins, 4 and whoever glorifies his mother is like one who lays up treasure. 5 Whoever honors his father will be gladdened by his own children, and when he prays he will be heard. 6 Whoever glorifies his father will have long life, and whoever obeys the Lord will refresh his mother; 7 he will serve his parents as his masters. 12 O son, help your father in his old age, and do not grieve him as long as he lives; 13 even if he is lacking in understanding, show forbearance; in all your strength do not despise him. 14 For kindness to a father will not be forgotten, and against your sins it will be credited to you.

1 Blessed is every one who fears the LORD, who walks in his ways! 2 You shall eat the fruit of the labor of your hands; you shall be happy, and it shall be well with you. 3 Your wife will be like a fruitful vine within your house; your children will be like olive shoots around your table. 4 Lo, thus shall the man be blessed who fears the LORD. 5 The LORD bless you from Zion! May you see the prosperity of Jerusalem all the days of your life!

12 Put on then, as God’s chosen ones, holy and beloved, compassion, kindness, lowliness, meekness, and patience, 13 forbearing one another and, if one has a complaint against another, forgiving each other; as the Lord has forgiven you, so you also must forgive. 14 And above all these put on love, which binds everything together in perfect harmony. 15 And let the peace of Christ rule in your hearts, to which indeed you were called in the one body. And be thankful. 16 Let the word of Christ dwell in you richly, teach and admonish one another in all wisdom, and sing psalms and hymns and spiritual songs with thankfulness in your hearts to God. 17 And whatever you do, in word or deed, do everything in the name of the Lord Jesus, giving thanks to God the Father through him. 18 Wives, be subject to your husbands, as is fitting in the Lord. 19 Husbands, love your wives, and do not be harsh with them. 20 Children, obey your parents in everything, for this pleases the Lord. 21 Fathers, do not provoke your children, lest they become discouraged.

22 And when the time came for their purification according to the law of Moses, they brought him up to Jerusalem to present him to the Lord 23 (as it is written in the law of the Lord, “Every male that opens the womb shall be called holy to the Lord”) 24 and to offer a sacrifice according to what is said in the law of the Lord, “a pair of turtledoves, or two young pigeons.” 25 Now there was a man in Jerusalem, whose name was Simeon, and this man was righteous and devout, looking for the consolation of Israel, and the Holy Spirit was upon him. 26 And it had been revealed to him by the Holy Spirit that he should not see death before he had seen the Lord’s Christ. 27 And inspired by the Spirit he came into the temple; and when the parents brought in the child Jesus, to do for him according to the custom of the law, 28 he took him up in his arms and blessed God and said, 29 “Lord, now lettest thou thy servant depart in peace, according to thy word; 30 for mine eyes have seen thy salvation 31 which thou hast prepared in the presence of all peoples, 32 a light for revelation to the Gentiles, and for glory to thy people Israel.” 33 And his father and his mother marveled at what was said about him; 34 and Simeon blessed them and said to Mary his mother, “Behold, this child is set for the fall and rising of many in Israel, and for a sign that is spoken against 35 (and a sword will pierce through your own soul also), that thoughts out of many hearts may be revealed.” 36 And there was a prophetess, Anna, the daughter of Phan’u-el, of the tribe of Asher; she was of a great age, having lived with her husband seven years from her virginity, 37 and as a widow till she was eighty-four. She did not depart from the temple, worshiping with fasting and prayer night and day. 38 And coming up at that very hour she gave thanks to God, and spoke of him to all who were looking for the redemption of Jerusalem. 39 And when they had performed everything according to the law of the Lord, they returned into Galilee, to their own city, Nazareth. 40 And the child grew and became strong, filled with wisdom; and the favor of God was upon him.

Reflection for the day: “God, to whom angels submit themselves and who principalities and powers obey, was subject to Mary; and not only to Mary but Joseph also for Mary’s sake [….]. God obeyed a human creature; this is humility without precedent. A human creature commands God; it is sublime beyond measure.” — St. Bernard of Clairvaux