Monday of the 28th Week in Ordinary Time 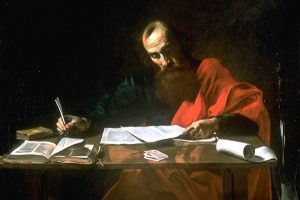 
1 Paul, a servant of Jesus Christ, called to be an apostle, set apart for the gospel of God 2 which he promised beforehand through his prophets in the holy scriptures, 3 the gospel concerning his Son, who was descended from David according to the flesh 4 and designated Son of God in power according to the Spirit of holiness by his resurrection from the dead, Jesus Christ our Lord, 5 through whom we have received grace and apostleship to bring about the obedience of faith for the sake of his name among all the nations, 6 including yourselves who are called to belong to Jesus Christ; 7 To all God’s beloved in Rome, who are called to be saints: Grace to you and peace from God our Father and the Lord Jesus Christ.

Reflection for the day: “He bought brothers for Himself by His blood, He made them welcome by being rejected, He ransomed them by being sold, He honoured them by being dishonoured, He gave them life by being put to death. So, brethren, rejoice in the Lord, not in the world. That is, rejoice in the truth, not in wickedness, rejoice in the hope of eternity, not in the fading flower of vanity. That is the way to rejoice. Wherever you are on earth, however long you remain on earth, the Lord is near, do not be anxious about anything!” — St. Augustine