Memorial of St. Francis of Assisi 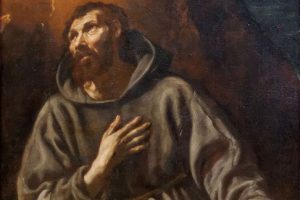 
1:1 Now the word of the Lord came to Jonah the son of Amit′tai, saying, 2 “Arise, go to Nin′eveh, that great city, and cry against it; for their wickedness has come up before me.” 3 But Jonah rose to flee to Tarshish from the presence of the Lord. He went down to Joppa and found a ship going to Tarshish; so he paid the fare, and went on board, to go with them to Tarshish, away from the presence of the Lord. 4 But the Lord hurled a great wind upon the sea, and there was a mighty tempest on the sea, so that the ship threatened to break up. 5 Then the mariners were afraid, and each cried to his god; and they threw the wares that were in the ship into the sea, to lighten it for them. But Jonah had gone down into the inner part of the ship and had lain down, and was fast asleep. 6 So the captain came and said to him, “What do you mean, you sleeper? Arise, call upon your god! Perhaps the god will give a thought to us, that we do not perish.” 7 And they said to one another, “Come, let us cast lots, that we may know on whose account this evil has come upon us.” So they cast lots, and the lot fell upon Jonah. 8 Then they said to him, “Tell us on whose account this evil has come upon us. What is your occupation? And whence do you come? What is your country? And of what people are you?”  And he 9 said to them, “I am a Hebrew; and I fear the Lord, the God of heaven, who made the sea and the dry land.” 10 Then the men were exceedingly afraid, and said to him, “What is this that you have done!” For the men knew that he was fleeing from the presence of the Lord, because he had told them. 11 Then they said to him, “What shall we do to you, that the sea may quiet down for us?” For the sea grew more and more tempestuous. 12 He said to them, “Take me up and throw me into the sea; then the sea will quiet down for you; for I know it is because of me that this great tempest has come upon you.” 13 Nevertheless the men rowed hard to bring the ship back to land, but they could not, for the sea grew more and more tempestuous against them. 14 Therefore they cried to the Lord, “We beseech thee, O Lord, let us not perish for this man’s life, and lay not on us innocent blood; for thou, O Lord, hast done as it pleased thee.” 15 So they took up Jonah and threw him into the sea; and the sea ceased from its raging. 16 Then the men feared the Lord exceedingly, and they offered a sacrifice to the Lord and made vows. 17 And the Lord appointed a great fish to swallow up Jonah; and Jonah was in the belly of the fish three days and three nights. 2:1 Then Jonah prayed to the Lord his God from the belly of the fish, 2 saying, “I called to the Lord, out of my distress, and he answered me; out of the belly of Sheol I cried, and thou didst hear my voice.” 10 And the Lord spoke to the fish, and it vomited out Jonah upon the dry land.


3 For thou didst cast me into the deep, into the heart of the seas, and the flood was round about me; all thy waves and thy billows passed over me. 4 Then I said, ‘I am cast out from thy presence; how shall I again look upon thy holy temple?’ 5 The waters closed in over me, the deep was round about me; weeds were wrapped about my head. 8 Those who pay regard to vain idols forsake their true loyalty.


25 And behold, a lawyer stood up to put him to the test, saying, “Teacher, what shall I do to inherit eternal life?” 26 He said to him, “What is written in the law? How do you read?” 27 And he answered, “You shall love the Lord your God with all your heart, and with all your soul, and with all your strength, and with all your mind; and your neighbor as yourself.” 28 And he said to him, “You have answered right; do this, and you will live.” 29 But he, desiring to justify himself, said to Jesus, “And who is my neighbor?” 30 Jesus replied, “A man was going down from Jerusalem to Jericho, and he fell among robbers, who stripped him and beat him, and departed, leaving him half dead. 31 Now by chance a priest was going down that road; and when he saw him he passed by on the other side. 32 So likewise a Levite, when he came to the place and saw him, passed by on the other side. 33 But a Samaritan, as he journeyed, came to where he was; and when he saw him, he had compassion, 34 and went to him and bound up his wounds, pouring on oil and wine; then he set him on his own beast and brought him to an inn, and took care of him. 35 And the next day he took out two denarii and gave them to the innkeeper, saying, ‘Take care of him; and whatever more you spend, I will repay you when I come back.’ 36 Which of these three, do you think, proved neighbor to the man who fell among the robbers?” 37 He said, “The one who showed mercy on him.” And Jesus said to him, “Go and do likewise.”

Reflection for the day: “Remember that when you leave this earth, you can take with you, nothing that you have received—only what you have given—a full heart, enriched by honest service, love, sacrifice and courage.” — St Francis of Assisi