Tuesday of the 20th Week in Ordinary Time 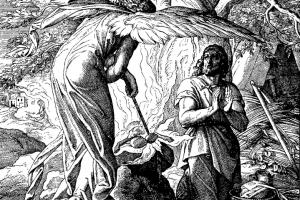 
11 Now the angel of the LORD came and sat under the oak at Ophrah, which belonged to Jo’ash the Abiez’rite, as his son Gideon was beating out wheat in the wine press, to hide it from the Mid’ianites. 12 And the angel of the LORD appeared to him and said to him, “The LORD is with you, you mighty man of valor.” 13 And Gideon said to him, “Pray, sir, if the LORD is with us, why then has all this befallen us? And where are all his wonderful deeds which our fathers recounted to us, saying, `Did not the LORD bring us up from Egypt?’ But now the LORD has cast us off, and given us into the hand of Mid’ian.” 14 And the LORD turned to him and said, “Go in this might of yours and deliver Israel from the hand of Mid’ian; do not I send you?” 15 And he said to him, “Pray, Lord, how can I deliver Israel? Behold, my clan is the weakest in Manas’seh, and I am the least in my family.” 16 And the LORD said to him, “But I will be with you, and you shall smite the Mid’ianites as one man.” 17 And he said to him, “If now I have found favor with thee, then show me a sign that it is thou who speakest with me. 18 Do not depart from here, I pray thee, until I come to thee, and bring out my present, and set it before thee.” And he said, “I will stay till you return.” 19 So Gideon went into his house and prepared a kid, and unleavened cakes from an ephah of flour; the meat he put in a basket, and the broth he put in a pot, and brought them to him under the oak and presented them. 20 And the angel of God said to him, “Take the meat and the unleavened cakes, and put them on this rock, and pour the broth over them.” And he did so. 21 Then the angel of the LORD reached out the tip of the staff that was in his hand, and touched the meat and the unleavened cakes; and there sprang up fire from the rock and consumed the flesh and the unleavened cakes; and the angel of the LORD vanished from his sight. 22 Then Gideon perceived that he was the angel of the LORD; and Gideon said, “Alas, O Lord GOD! For now I have seen the angel of the LORD face to face.” 23 But the LORD said to him, “Peace be to you; do not fear, you shall not die.” 24 Then Gideon built an altar there to the LORD, and called it, The LORD is peace. To this day it still stands at Ophrah, which belongs to the Abiez’rites.


8 Let me hear what God the LORD will speak, for he will speak peace to his people, to his saints, to those who turn to him in their hearts. 10 Steadfast love and faithfulness will meet; righteousness and peace will kiss each other. 11 Faithfulness will spring up from the ground, and righteousness will look down from the sky. 12 Yea, the LORD will give what is good, and our land will yield its increase. 13 Righteousness will go before him, and make his footsteps a way.


23 And Jesus said to his disciples, “Truly, I say to you, it will be hard for a rich man to enter the kingdom of heaven. 24 Again I tell you, it is easier for a camel to go through the eye of a needle than for a rich man to enter the kingdom of God.” 25 When the disciples heard this they were greatly astonished, saying, “Who then can be saved?” 26 But Jesus looked at them and said to them, “With men this is impossible, but with God all things are possible.” 27 Then Peter said in reply, “Lo, we have left everything and followed you. What then shall we have?” 28 Jesus said to them, “Truly, I say to you, in the new world, when the Son of man shall sit on his glorious throne, you who have followed me will also sit on twelve thrones, judging the twelve tribes of Israel. 29 And every one who has left houses or brothers or sisters or father or mother or children or lands, for my name’s sake, will receive a hundredfold, and inherit eternal life. 30 But many that are first will be last, and the last first.”

Reflection for the day: “Though the path is plain and smooth for men of good will, he who walks it will not travel far, and will do so only with difficulty, if he does not have good feet: that is, courage and a persevering spirit.” — St. John of the Cross