Friday of the 19th Week in Ordinary Time 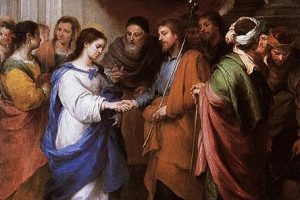 
1 Then Joshua gathered all the tribes of Israel to Shechem, and summoned the elders, the heads, the judges, and the officers of Israel; and they presented themselves before God. 2 And Joshua said to all the people, “Thus says the LORD, the God of Israel, `Your fathers lived of old beyond the Euphra’tes, Terah, the father of Abraham and of Nahor; and they served other gods. 3 Then I took your father Abraham from beyond the River and led him through all the land of Canaan, and made his offspring many. I gave him Isaac; 4 and to Isaac I gave Jacob and Esau. And I gave Esau the hill country of Se’ir to possess, but Jacob and his children went down to Egypt. 5 And I sent Moses and Aaron, and I plagued Egypt with what I did in the midst of it; and afterwards I brought you out. 6 Then I brought your fathers out of Egypt, and you came to the sea; and the Egyptians pursued your fathers with chariots and horsemen to the Red Sea. 7 And when they cried to the LORD, he put darkness between you and the Egyptians, and made the sea come upon them and cover them; and your eyes saw what I did to Egypt; and you lived in the wilderness a long time. 8 Then I brought you to the land of the Amorites, who lived on the other side of the Jordan; they fought with you, and I gave them into your hand, and you took possession of their land, and I destroyed them before you. 9 Then Balak the son of Zippor, king of Moab, arose and fought against Israel; and he sent and invited Balaam the son of Be’or to curse you, 10 but I would not listen to Balaam; therefore he blessed you; so I delivered you out of his hand. 11 And you went over the Jordan and came to Jericho, and the men of Jericho fought against you, and also the Amorites, the Per’izzites, the Canaanites, the Hittites, the Gir’gashites, the Hivites, and the Jeb’usites; and I gave them into your hand. 12 And I sent the hornet before you, which drove them out before you, the two kings of the Amorites; it was not by your sword or by your bow. 13 I gave you a land on which you had not labored, and cities which you had not built, and you dwell therein; you eat the fruit of vineyards and oliveyards which you did not plant.'”


3 And Pharisees came up to him and tested him by asking, “Is it lawful to divorce one’s wife for any cause?” 4 He answered, “Have you not read that he who made them from the beginning made them male and female, 5 and said, `For this reason a man shall leave his father and mother and be joined to his wife, and the two shall become one flesh’? 6 So they are no longer two but one flesh. What therefore God has joined together, let not man put asunder.” 7 They said to him, “Why then did Moses command one to give a certificate of divorce, and to put her away?” 8 He said to them, “For your hardness of heart Moses allowed you to divorce your wives, but from the beginning it was not so. 9 And I say to you: whoever divorces his wife, except for unchastity, and marries another, commits adultery.” 10 The disciples said to him, “If such is the case of a man with his wife, it is not expedient to marry.” 11 But he said to them, “Not all men can receive this saying, but only those to whom it is given. 12 For there are eunuchs who have been so from birth, and there are eunuchs who have been made eunuchs by men, and there are eunuchs who have made themselves eunuchs for the sake of the kingdom of heaven. He who is able to receive this, let him receive it.”

Reflection for the day: “It takes three to make love, not two: you, your spouse, and God. Without God people only succeed in bringing out the worst in one another. Lovers who have nothing else to do but love each other soon find there is nothing else. Without a central loyalty life is unfinished.” –Venerable Fulton Sheen