Thursday of the 19th Week in Ordinary Time 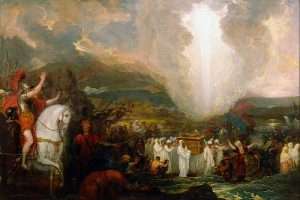 
7 And the LORD said to Joshua, “This day I will begin to exalt you in the sight of all Israel, that they may know that, as I was with Moses, so I will be with you. 8 And you shall command the priests who bear the ark of the covenant, `When you come to the brink of the waters of the Jordan, you shall stand still in the Jordan.'” 9 And Joshua said to the people of Israel, “Come hither, and hear the words of the LORD your God.” 10 And Joshua said, “Hereby you shall know that the living God is among you, and that he will without fail drive out from before you the Canaanites, the Hittites, the Hivites, the Per’izzites, the Gir’gashites, the Amorites, and the Jeb’usites. 11 Behold, the ark of the covenant of the Lord of all the earth is to pass over before you into the Jordan. 13 And when the soles of the feet of the priests who bear the ark of the LORD, the Lord of all the earth, shall rest in the waters of the Jordan, the waters of the Jordan shall be stopped from flowing, and the waters coming down from above shall stand in one heap.” 14 So, when the people set out from their tents, to pass over the Jordan with the priests bearing the ark of the covenant before the people, 15 and when those who bore the ark had come to the Jordan, and the feet of the priests bearing the ark were dipped in the brink of the water (the Jordan overflows all its banks throughout the time of harvest), 16 the waters coming down from above stood and rose up in a heap far off, at Adam, the city that is beside Zar’ethan, and those flowing down toward the sea of the Arabah, the Salt Sea, were wholly cut off; and the people passed over opposite Jericho. 17 And while all Israel were passing over on dry ground, the priests who bore the ark of the covenant of the LORD stood on dry ground in the midst of the Jordan, until all the nation finished passing over the Jordan.


1 When Israel went forth from Egypt, the house of Jacob from a people of strange language, 2 Judah became his sanctuary, Israel his dominion. 3 The sea looked and fled, Jordan turned back. 4 The mountains skipped like rams, the hills like lambs. 5 What ails you, O sea, that you flee? O Jordan, that you turn back? 6 O mountains, that you skip like rams? O hills, like lambs?


18:21 Then Peter came up and said to him, “Lord, how often shall my brother sin against me, and I forgive him? As many as seven times?” 22 Jesus said to him, “I do not say to you seven times, but seventy times seven. 23 Therefore the kingdom of heaven may be compared to a king who wished to settle accounts with his servants. 24 When he began the reckoning, one was brought to him who owed him ten thousand talents; 25 and as he could not pay, his lord ordered him to be sold, with his wife and children and all that he had, and payment to be made. 26 So the servant fell on his knees, imploring him, `Lord, have patience with me, and I will pay you everything.’ 27 And out of pity for him the lord of that servant released him and forgave him the debt. 28 But that same servant, as he went out, came upon one of his fellow servants who owed him a hundred denarii; and seizing him by the throat he said, `Pay what you owe.’ 29 So his fellow servant fell down and besought him, `Have patience with me, and I will pay you.’ 30 He refused and went and put him in prison till he should pay the debt. 31 When his fellow servants saw what had taken place, they were greatly distressed, and they went and reported to their lord all that had taken place. 32 Then his lord summoned him and said to him, `You wicked servant! I forgave you all that debt because you besought me; 33 and should not you have had mercy on your fellow servant, as I had mercy on you?’ 34 And in anger his lord delivered him to the jailers, till he should pay all his debt. 35 So also my heavenly Father will do to every one of you, if you do not forgive your brother from your heart.” 19:1 Now when Jesus had finished these sayings, he went away from Galilee and entered the region of Judea beyond the Jordan.

Reflection for the day: “If a man finds it very hard to forgive injuries, let him look at a Crucifix, and think that Christ shed all His Blood for him, and not only forgave His enemies, but even prayed His Heavenly Father to forgive them also. Let him remember that when he says the Pater Noster, every day, instead of asking pardon for his sins, he is calling down vengeance on himself.” — St. Philip Neri