Tuesday of the 18th Week in Ordinary Time 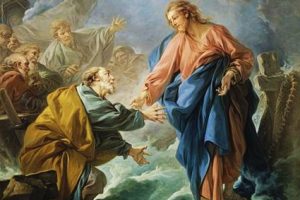 1 Miriam and Aaron spoke against Moses because of the Cushite woman whom he had married, for he had married a Cushite woman; 2 and they said, “Has the LORD indeed spoken only through Moses? Has he not spoken through us also?” And the LORD heard it. 3 Now the man Moses was very meek, more than all men that were on the face of the earth. 4 And suddenly the LORD said to Moses and to Aaron and Miriam, “Come out, you three, to the tent of meeting.” And the three of them came out. 5 And the LORD came down in a pillar of cloud, and stood at the door of the tent, and called Aaron and Miriam; and they both came forward. 6 And he said, “Hear my words: If there is a prophet among you, I the LORD make myself known to him in a vision, I speak with him in a dream. 7 Not so with my servant Moses; he is entrusted with all my house. 8 With him I speak mouth to mouth, clearly, and not in dark speech; and he beholds the form of the LORD. Why then were you not afraid to speak against my servant Moses?” 9 And the anger of the LORD was kindled against them, and he departed; 10 and when the cloud removed from over the tent, behold, Miriam was leprous, as white as snow. And Aaron turned towards Miriam, and behold, she was leprous. 11 And Aaron said to Moses, “Oh, my lord, do not punish us because we have done foolishly and have sinned. 12 Let her not be as one dead, of whom the flesh is half consumed when he comes out of his mother’s womb.” 13 And Moses cried to the LORD, “Heal her, O God, I beseech thee.”

1 Have mercy on me, O God, according to thy steadfast love; according to thy abundant mercy blot out my transgressions. 2 Wash me thoroughly from my iniquity, and cleanse me from my sin! 3 For I know my transgressions, and my sin is ever before me. 4 Against thee, thee only, have I sinned, and done that which is evil in thy sight, so that thou art justified in thy sentence and blameless in thy judgment. 5 Behold, I was brought forth in iniquity, and in sin did my mother conceive me. 10 Create in me a clean heart, O God, and put a new and right spirit within me. 11 Cast me not away from thy presence, and take not thy holy Spirit from me.

22 Then he made the disciples get into the boat and go before him to the other side, while he dismissed the crowds. 23 And after he had dismissed the crowds, he went up on the mountain by himself to pray. When evening came, he was there alone, 24 but the boat by this time was many furlongs distant from the land, beaten by the waves; for the wind was against them. 25 And in the fourth watch of the night he came to them, walking on the sea. 26 But when the disciples saw him walking on the sea, they were terrified, saying, “It is a ghost!” And they cried out for fear. 27 But immediately he spoke to them, saying, “Take heart, it is I; have no fear.” 28 And Peter answered him, “Lord, if it is you, bid me come to you on the water.” 29 He said, “Come.” So Peter got out of the boat and walked on the water and came to Jesus; 30 but when he saw the wind, he was afraid, and beginning to sink he cried out, “Lord, save me.” 31 Jesus immediately reached out his hand and caught him, saying to him, “O man of little faith, why did you doubt?” 32 And when they got into the boat, the wind ceased. 33 And those in the boat worshiped him, saying, “Truly you are the Son of God.” 34 And when they had crossed over, they came to land at Gennesaret. 35 And when the men of that place recognized him, they sent round to all that region and brought to him all that were sick, 36 and besought him that they might only touch the fringe of his garment; and as many as touched it were made well.

Reflection for the day: “When I steeped myself in prayer, I was transported in spirit to the Chapel, where I saw the Lord Jesus, exposed in the Monstrance. In place of the Monstrance I saw the glorious face of the Lord, and He said to me, ‘What you see in reality , these souls see through faith. Oh, how pleasing to Me is their great faith! You see, although there appears to be no trace of life in Me, in reality it is present in its fullness in each and every Host. But for Me to be able to act upon the soul, the soul must have faith. O how pleasing to Me is living faith!'” — St. Faustina Kowalska