Monday of the 18th Week in Ordinary Time 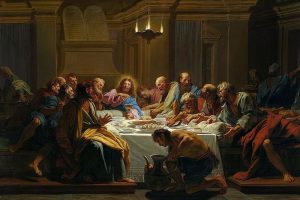 
4 Now the rabble that was among them had a strong craving; and the people of Israel also wept again, and said, “O that we had meat to eat! 5 We remember the fish we ate in Egypt for nothing, the cucumbers, the melons, the leeks, the onions, and the garlic; 6 but now our strength is dried up, and there is nothing at all but this manna to look at.” 7 Now the manna was like coriander seed, and its appearance like that of bdellium. 8 The people went about and gathered it, and ground it in mills or beat it in mortars, and boiled it in pots, and made cakes of it; and the taste of it was like the taste of cakes baked with oil. 9 When the dew fell upon the camp in the night, the manna fell with it. 10 Moses heard the people weeping throughout their families, every man at the door of his tent; and the anger of the Lord blazed hotly, and Moses was displeased. 11 Moses said to the Lord, “Why hast thou dealt ill with thy servant? And why have I not found favor in thy sight, that thou dost lay the burden of all this people upon me? 12 Did I conceive all this people? Did I bring them forth, that thou shouldst say to me, ‘Carry them in your bosom, as a nurse carries the sucking child,’ to the land which thou didst swear to give their fathers? 13 Where am I to get meat to give to all this people? For they weep before me and say, ‘Give us meat, that we may eat.’ 14 I am not able to carry all this people alone, the burden is too heavy for me. 15 If thou wilt deal thus with me, kill me at once, if I find favor in thy sight, that I may not see my wretchedness.”


12 “So I gave them over to their stubborn hearts, to follow their own counsels. 13 O that my people would listen to me, that Israel would walk in my ways! 14 I would soon subdue their enemies, and turn my hand against their foes. 15 Those who hate the Lord would cringe toward him, and their fate would last for ever. 16 I would feed you with the finest of the wheat, and with honey from the rock I would satisfy you.”


13 Now when Jesus heard this, he withdrew from there in a boat to a lonely place apart. But when the crowds heard it, they followed him on foot from the towns. 14 As he went ashore he saw a great throng; and he had compassion on them, and healed their sick. 15 When it was evening, the disciples came to him and said, “This is a lonely place, and the day is now over; send the crowds away to go into the villages and buy food for themselves.” 16 Jesus said, “They need not go away; you give them something to eat.” 17 They said to him, “We have only five loaves here and two fish.” 18 And he said, “Bring them here to me.” 19 Then he ordered the crowds to sit down on the grass; and taking the five loaves and the two fish he looked up to heaven, and blessed, and broke and gave the loaves to the disciples, and the disciples gave them to the crowds. 20 And they all ate and were satisfied. And they took up twelve baskets full of the broken pieces left over. 21 And those who ate were about five thousand men, besides women and children.

Reflection for the day: “Hear Mass daily; it will prosper the whole day. All your duties will be performed the better for it, and your soul will be stronger to bear its daily cross. The Mass is the most holy act of religion; you can do nothing that can give greater glory to God or be more profitable for your soul than to hear Mass both frequently and devoutly. It is the favorite devotion of the saints.” — St. Peter Julian Eymard