Monday of the 16th Week in Ordinary Time 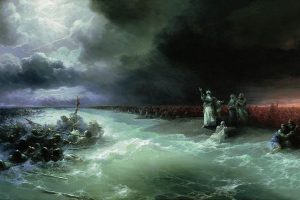 
5 When the king of Egypt was told that the people had fled, the mind of Pharaoh and his servants was changed toward the people, and they said, “What is this we have done, that we have let Israel go from serving us?” 6 So he made ready his chariot and took his army with him, 7 and took six hundred picked chariots and all the other chariots of Egypt with officers over all of them. 8 And the LORD hardened the heart of Pharaoh king of Egypt and he pursued the people of Israel as they went forth defiantly. 9 The Egyptians pursued them, all Pharaoh’s horses and chariots and his horsemen and his army, and overtook them encamped at the sea, by Pi-ha-hi’roth, in front of Ba’al-ze’phon. 10 When Pharaoh drew near, the people of Israel lifted up their eyes, and behold, the Egyptians were marching after them; and they were in great fear. And the people of Israel cried out to the LORD; 11 and they said to Moses, “Is it because there are no graves in Egypt that you have taken us away to die in the wilderness? What have you done to us, in bringing us out of Egypt? 12 Is not this what we said to you in Egypt, `Let us alone and let us serve the Egyptians’? For it would have been better for us to serve the Egyptians than to die in the wilderness.” 13 And Moses said to the people, “Fear not, stand firm, and see the salvation of the LORD, which he will work for you today; for the Egyptians whom you see today, you shall never see again. 14 The LORD will fight for you, and you have only to be still.” 15 The LORD said to Moses, “Why do you cry to me? Tell the people of Israel to go forward. 16 Lift up your rod, and stretch out your hand over the sea and divide it, that the people of Israel may go on dry ground through the sea. 17 And I will harden the hearts of the Egyptians so that they shall go in after them, and I will get glory over Pharaoh and all his host, his chariots, and his horsemen. 18 And the Egyptians shall know that I am the LORD, when I have gotten glory over Pharaoh, his chariots, and his horsemen.”


1 Then Moses and the people of Israel sang this song to the LORD, saying, “I will sing to the LORD, for he has triumphed gloriously; the horse and his rider he has thrown into the sea. 2 The LORD is my strength and my song, and he has become my salvation; this is my God, and I will praise him, my father’s God, and I will exalt him. 3 The LORD is a man of war; the LORD is his name. 4 Pharaoh’s chariots and his host he cast into the sea; and his picked officers are sunk in the Red Sea. 5 The floods cover them; they went down into the depths like a stone. 6 Thy right hand, O LORD, glorious in power, thy right hand, O LORD, shatters the enemy.”

Reflection for the day: “Nothing great is ever achieved without much enduring.” – St. Catherine of Siena