Monday of the 15th Week in Ordinary Time 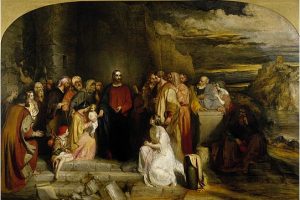 8 Now there arose a new king over Egypt, who did not know Joseph. 9 And he said to his people, “Behold, the people of Israel are too many and too mighty for us. 10 Come, let us deal shrewdly with them, lest they multiply, and, if war befall us, they join our enemies and fight against us and escape from the land.” 11 Therefore they set taskmasters over them to afflict them with heavy burdens; and they built for Pharaoh store-cities, Pithom and Ra-am’ses. 12 But the more they were oppressed, the more they multiplied and the more they spread abroad. And the Egyptians were in dread of the people of Israel. 13 So they made the people of Israel serve with rigor, 14 and made their lives bitter with hard service, in mortar and brick, and in all kinds of work in the field; in all their work they made them serve with rigor. 22 Then Pharaoh commanded all his people, “Every son that is born to the Hebrews you shall cast into the Nile, but you shall let every daughter live.”

10:34 “Do not think that I have come to bring peace on earth; I have not come to bring peace, but a sword. 35 For I have come to set a man against his father, and a daughter against her mother, and a daughter-in-law against her mother-in-law; 36 and a man’s foes will be those of his own household. 37 He who loves father or mother more than me is not worthy of me; and he who loves son or daughter more than me is not worthy of me; 38 and he who does not take his cross and follow me is not worthy of me. 39 He who finds his life will lose it, and he who loses his life for my sake will find it. 40 “He who receives you receives me, and he who receives me receives him who sent me. 41 He who receives a prophet because he is a prophet shall receive a prophet’s reward, and he who receives a righteous man because he is a righteous man shall receive a righteous man’s reward. 42 And whoever gives to one of these little ones even a cup of cold water because he is a disciple, truly, I say to you, he shall not lose his reward.” 11:1 And when Jesus had finished instructing his twelve disciples, he went on from there to teach and preach in their cities.

Reflection for the day: “The most powerful weapon to conquer the devil is humility. For, as he does not know at all how to employ it, neither does he know how to defend himself from it.” — St. Vincent de Paul