Memorial of the First Holy Martyrs of the Holy Roman Church 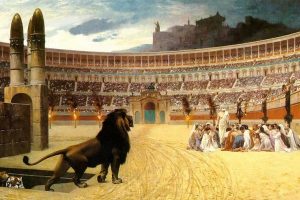 
5 Abraham was a hundred years old when his son Isaac was born to him. 8 And the child grew, and was weaned; and Abraham made a great feast on the day that Isaac was weaned. 9 But Sarah saw the son of Hagar the Egyptian, whom she had borne to Abraham, playing with her son Isaac. 10 So she said to Abraham, “Cast out this slave woman with her son; for the son of this slave woman shall not be heir with my son Isaac.” 11 And the thing was very displeasing to Abraham on account of his son. 12 But God said to Abraham, “Be not displeased because of the lad and because of your slave woman; whatever Sarah says to you, do as she tells you, for through Isaac shall your descendants be named. 13 And I will make a nation of the son of the slave woman also, because he is your offspring.” 14 So Abraham rose early in the morning, and took bread and a skin of water, and gave it to Hagar, putting it on her shoulder, along with the child, and sent her away. And she departed, and wandered in the wilderness of Beer-sheba. 15 When the water in the skin was gone, she cast the child under one of the bushes. 16 Then she went, and sat down over against him a good way off, about the distance of a bowshot; for she said, “Let me not look upon the death of the child.” And as she sat over against him, the child lifted up his voice and wept. 17 And God heard the voice of the lad; and the angel of God called to Hagar from heaven, and said to her, “What troubles you, Hagar? Fear not; for God has heard the voice of the lad where he is. 18 Arise, lift up the lad, and hold him fast with your hand; for I will make him a great nation.” 19 Then God opened her eyes, and she saw a well of water; and she went, and filled the skin with water, and gave the lad a drink. 20 And God was with the lad, and he grew up; he lived in the wilderness, and became an expert with the bow.


6 This poor man cried, and the LORD heard him, and saved him out of all his troubles. 7 The angel of the LORD encamps around those who fear him, and delivers them. 8 O taste and see that the LORD is good! Happy is the man who takes refuge in him! 9 O fear the LORD, you his saints, for those who fear him have no want! 10 The young lions suffer want and hunger; but those who seek the LORD lack no good thing. 11 Come, O sons, listen to me, I will teach you the fear of the LORD. 12 What man is there who desires life, and covets many days, that he may enjoy good?


28 And when he came to the other side, to the country of the Gadarenes, two demoniacs met him, coming out of the tombs, so fierce that no one could pass that way. 29 And behold, they cried out, “What have you to do with us, O Son of God? Have you come here to torment us before the time?” 30 Now a herd of many swine was feeding at some distance from them. 31 And the demons begged him, “If you cast us out, send us away into the herd of swine.” 32 And he said to them, “Go.” So they came out and went into the swine; and behold, the whole herd rushed down the steep bank into the sea, and perished in the waters. 33 The herdsmen fled, and going into the city they told everything, and what had happened to the demoniacs. 34 And behold, all the city came out to meet Jesus; and when they saw him, they begged him to leave their neighborhood.

Reflection for the day: “I think He intends to try you like gold in the crucible, so as to number you amongst His most faithful servants. Therefore you must lovingly embrace all occasions of suffering, considering them as precious tokens of His love. To suffer in silence and without complaint is what He asks of you.” — St. Margaret Mary Alacoque