Solemnity of the Nativity of John the Baptist 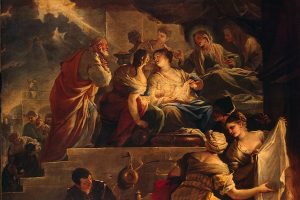 
22 “And when he had removed him, he raised up David to be their king; of whom he testified and said, `I have found in David the son of Jesse a man after my heart, who will do all my will.’ 23 Of this man’s posterity God has brought to Israel a Savior, Jesus, as he promised. 24 Before his coming John had preached a baptism of repentance to all the people of Israel. 25 And as John was finishing his course, he said, `What do you suppose that I am? I am not he. No, but after me one is coming, the sandals of whose feet I am not worthy to untie.’ 26 Brethren, sons of the family of Abraham, and those among you that fear God, to us has been sent the message of this salvation.”


57 Now the time came for Elizabeth to be delivered, and she gave birth to a son. 58 And her neighbors and kinsfolk heard that the Lord had shown great mercy to her, and they rejoiced with her. 59 And on the eighth day they came to circumcise the child; and they would have named him Zechari’ah after his father, 60 but his mother said, “Not so; he shall be called John.” 61 And they said to her, “None of your kindred is called by this name.” 62 And they made signs to his father, inquiring what he would have him called. 63And he asked for a writing tablet, and wrote, “His name is John.” And they all marveled. 64 And immediately his mouth was opened and his tongue loosed, and he spoke, blessing God. 65 And fear came on all their neighbors. And all these things were talked about through all the hill country of Judea; 66 and all who heard them laid them up in their hearts, saying, “What then will this child be?” For the hand of the Lord was with him. 80 And the child grew and became strong in spirit, and he was in the wilderness till the day of his manifestation to Israel.

Reflection for the day: “As an authentic prophet, John bore witness to the truth without compromise. He denounced transgressions of God’s commandments, even when it was the powerful who were responsible for them. Thus, when he accused Herod and Herodias of adultery, he paid with his life, sealing with martyrdom, his service to Christ who is Truth in person.” — Pope Emeritus Benedict XVI