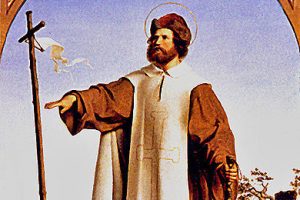 
1 Tobit then called his son Tobias and said to him, “My son, see to the wages of the man who went with you; and he must also be given more.” 5 So he called the angel and said to him, “Take half of all that you two have brought back.” 6 Then the angel called the two of them privately and said to them: “Praise God and give thanks to him; exalt him and give thanks to him in the presence of all the living for what he has done for you. It is good to praise God and to exalt his name, worthily declaring the works of God. Do not be slow to give him thanks. 7 It is good to guard the secret of a king, but gloriously to reveal the works of God. Do good, and evil will not overtake you. 8 Prayer is good when accompanied by fasting, almsgiving, and righteousness. A little with righteousness is better than much with wrongdoing. It is better to give alms than to treasure up gold. 9 For almsgiving delivers from death, and it will purge away every sin. Those who perform deeds of charity and of righteousness will have fulness of life; 10 but those who commit sin are the enemies of their own lives. 11 “I will not conceal anything from you. I have said, `It is good to guard the secret of a king, but gloriously to reveal the works of God.’ 12 And so, when you and your daughter-in-law Sarah prayed, I brought a reminder of your prayer before the Holy One; and when you buried the dead, I was likewise present with you. 13 When you did not hesitate to rise and leave your dinner in order to go and lay out the dead, your good deed was not hidden from me, but I was with you. 14 So now God sent me to heal you and your daughter-in-law Sarah. 15 I am Raphael, one of the seven holy angels who present the prayers of the saints and enter into the presence of the glory of the Holy One.” 20 And now give thanks to God, for I am ascending to him who sent me. Write in a book everything that has happened.”


2 For he afflicts, and he shows mercy; he leads down to Hades, and brings up again, and there is no one who can escape his hand. 6 If you turn to him with all your heart and with all your soul, to do what is true before him, then he will turn to you and will not hide his face from you. But see what he will do with you; give thanks to him with your full voice. Praise the Lord of righteousness, and exalt the King of the ages. I give him thanks in the land of my captivity, and I show his power and majesty to a nation of sinners. Turn back, you sinners, and do right before him; who knows if he will accept you and have mercy on you? 7 I exalt my God; my soul exalts the King of heaven, and will rejoice in his majesty. 8 Let all men speak, and give him thanks in Jerusalem.


38 And in his teaching he said, “Beware of the scribes, who like to go about in long robes, and to have salutations in the market places 39and the best seats in the synagogues and the places of honor at feasts, 40 who devour widows’ houses and for a pretense make long prayers. They will receive the greater condemnation.” 41 And he sat down opposite the treasury, and watched the multitude putting money into the treasury. Many rich people put in large sums. 42 And a poor widow came, and put in two copper coins, which make a penny. 43 And he called his disciples to him, and said to them, “Truly, I say to you, this poor widow has put in more than all those who are contributing to the treasury. 44 For they all contributed out of their abundance; but she out of her poverty has put in everything she had, her whole living.”

Reflection for the day: “In her voyage across the ocean of this world, the Church is like a great ship being pounded by the waves of life’s different stresses. Our duty is not to abandon ship but to keep her on her course.” ― Saint Boniface