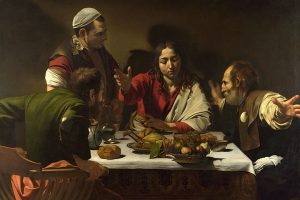 1 Now Peter and John were going up to the temple at the hour of prayer, the ninth hour. 2 And a man lame from birth was being carried, whom they laid daily at that gate of the temple which is called Beautiful to ask alms of those who entered the temple. 3 Seeing Peter and John about to go into the temple, he asked for alms. 4 And Peter directed his gaze at him, with John, and said, “Look at us.” 5 And he fixed his attention upon them, expecting to receive something from them. 6 But Peter said, “I have no silver and gold, but I give you what I have; in the name of Jesus Christ of Nazareth, walk.” 7 And he took him by the right hand and raised him up; and immediately his feet and ankles were made strong. 8 And leaping up he stood and walked and entered the temple with them, walking and leaping and praising God. 9 And all the people saw him walking and praising God, 10 and recognized him as the one who sat for alms at the Beautiful Gate of the temple; and they were filled with wonder and amazement at what had happened to him.

1 O give thanks to the LORD, call on his name, make known his deeds among the peoples! 2 Sing to him, sing praises to him, tell of all his wonderful works! 3 Glory in his holy name; let the hearts of those who seek the LORD rejoice! 4 Seek the LORD and his strength, seek his presence continually! 6O offspring of Abraham his servant, sons of Jacob, his chosen ones! 7 He is the LORD our God; his judgments are in all the earth. 8 He is mindful of his covenant for ever, of the word that he commanded, for a thousand generations, 9 the covenant which he made with Abraham, his sworn promise to Isaac.

Reflection for the day: “The best, the surest and the most effective way of establishing peace on the face of the earth, is through the great power of Perpetual Adoration of the Blessed Sacrament.” — Pope St. John Paul II