Tuesday of the 5th Week in Ordinary Time 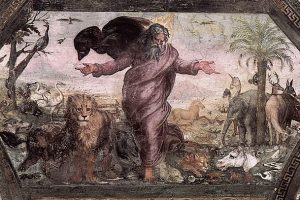 3 When I look at thy heavens, the work of thy fingers, the moon and the stars which thou hast established; 4 what is man that thou art mindful of him, and the son of man that thou dost care for him? 5 Yet thou hast made him little less than God, and dost crown him with glory and honor. 6 Thou hast given him dominion over the works of thy hands; thou hast put all things under his feet, 7 all sheep and oxen, and also the beasts of the field, 8the birds of the air, and the fish of the sea, whatever passes along the paths of the sea.

1 Now when the Pharisees gathered together to him, with some of the scribes, who had come from Jerusalem, 2 they saw that some of his disciples ate with hands defiled, that is, unwashed. 3 (For the Pharisees, and all the Jews, do not eat unless they wash their hands, observing the tradition of the elders; 4 and when they come from the market place, they do not eat unless they purify themselves; and there are many other traditions which they observe, the washing of cups and pots and vessels of bronze.) 5 And the Pharisees and the scribes asked him, “Why do your disciples not live according to the tradition of the elders, but eat with hands defiled?” 6 And he said to them, “Well did Isaiah prophesy of you hypocrites, as it is written, `This people honors me with their lips, but their heart is far from me; 7 in vain do they worship me, teaching as doctrines the precepts of men.’ 8 You leave the commandment of God, and hold fast the tradition of men.” 9 And he said to them, “You have a fine way of rejecting the commandment of God, in order to keep your tradition! 10 For Moses said, `Honor your father and your mother’; and, `He who speaks evil of father or mother, let him surely die’; 11 but you say, `If a man tells his father or his mother, What you would have gained from me is Corban’ (that is, given to God) — 12 then you no longer permit him to do anything for his father or mother, 13 thus making void the word of God through your tradition which you hand on. And many such things you do.”

Reflection for the day: “During this time we will need to keep our gaze fixed upon Jesus Christ, the ‘pioneer and perfecter of our faith’ (Heb 12:2): in him, all the anguish and all the longing of the human heart finds fulfilment. The joy of love, the answer to the drama of suffering and pain, the power of forgiveness in the face of an offence received and the victory of life over the emptiness of death: all this finds fulfilment in the mystery of his Incarnation, in his becoming man, in his sharing our human weakness so as to transform it by the power of his resurrection.” — Pope Emeritus Benedict XVI