Monday of the 5th Week in Ordinary Time 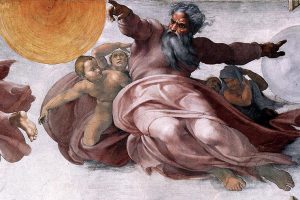 1 Bless the LORD, O my soul! O LORD my God, thou art very great! Thou art clothed with honor and majesty, 2 who coverest thyself with light as with a garment, who hast stretched out the heavens like a tent, 5 Thou didst set the earth on its foundations, so that it should never be shaken. 6 Thou didst cover it with the deep as with a garment; the waters stood above the mountains. 10 Thou makest springs gush forth in the valleys; they flow between the hills, 12 By them the birds of the air have their habitation; they sing among the branches. 24 O LORD, how manifold are thy works! In wisdom hast thou made them all; the earth is full of thy creatures. 35 Let sinners be consumed from the earth, and let the wicked be no more! Bless the LORD, O my soul! Praise the LORD!

53 And when they had crossed over, they came to land at Gennes’aret, and moored to the shore. 54 And when they got out of the boat, immediately the people recognized him, 55 and ran about the whole neighborhood and began to bring sick people on their pallets to any place where they heard he was. 56 And wherever he came, in villages, cities, or country, they laid the sick in the market places, and besought him that they might touch even the fringe of his garment; and as many as touched it were made well.

Reflection for the day: “We ought to speak, shout out against injustices, with confidence and without fear. We proclaim the principles of the Church, the reign of love, without forgetting that it is also a reign of justice!” — Bl. Miguel Agustin Pro