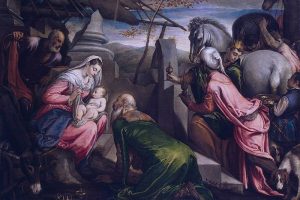 12 Praise the LORD, O Jerusalem! Praise your God, O Zion! 13 For he strengthens the bars of your gates; he blesses your sons within you. 14 He makes peace in your borders; he fills you with the finest of the wheat. 15 He sends forth his command to the earth; his word runs swiftly. 19 He declares his word to Jacob, his statutes and ordinances to Israel. 20 He has not dealt thus with any other nation; they do not know his ordinances. Praise the LORD!

12 While he was in one of the cities, there came a man full of leprosy; and when he saw Jesus, he fell on his face and besought him, “Lord, if you will, you can make me clean.” 13 And he stretched out his hand, and touched him, saying, “I will; be clean.” And immediately the leprosy left him. 14 And he charged him to tell no one; but “go and show yourself to the priest, and make an offering for your cleansing, as Moses commanded, for a proof to the people.” 15 But so much the more the report went abroad concerning him; and great multitudes gathered to hear and to be healed of their infirmities. 16 But he withdrew to the wilderness and prayed.

Reflection for the day: “Man’s maker was made man, that He, Ruler of the stars, might nurse at His mother’s breast; that the Bread might hunger, the Fountain thirst, the Light sleep, the Way be tired on its journey; that the Truth might be accused of false witness, the Teacher be beaten with whips, the Foundation be suspended on wood; that Strength might grow weak; that the Healer might be wounded; that Life might die.” — St. Augustine