Thursday of the 3rd Week of Advent 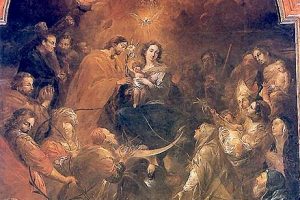 2 Assemble and hear, O sons of Jacob, and hearken to Israel your father. 8 Judah, your brothers shall praise you; your hand shall be on the neck of your enemies; your father’s sons shall bow down before you. 9 Judah is a lion’s whelp; from the prey, my son, you have gone up. He stooped down, he couched as a lion, and as a lioness; who dares rouse him up? 10 The scepter shall not depart from Judah, nor the ruler’s staff from between his feet, until he comes to whom it belongs; and to him shall be the obedience of the peoples.

A Psalm of Solomon. 1 Give the king thy justice, O God, and thy righteousness to the royal son! 2 May he judge thy people with righteousness, and thy poor with justice! 3 Let the mountains bear prosperity for the people, and the hills, in righteousness! 6 May he be like rain that falls on the mown grass, like showers that water the earth! 7 In his days may righteousness flourish, and peace abound, till the moon be no more! 16 May there be abundance of grain in the land; on the tops of the mountains may it wave; may its fruit be like Lebanon; and may men blossom forth from the cities like the grass of the field!

O Come, Thou Wisdom, from on high,
and order all things far and nigh;
to us the path of knowledge show,
and teach us in her ways to go.