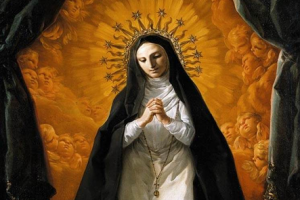 11 In him, according to the purpose of him who accomplishes all things according to the counsel of his will, 12 we who first hoped in Christ have been destined and appointed to live for the praise of his glory. 13 In him you also, who have heard the word of truth, the gospel of your salvation, and have believed in him, were sealed with the promised Holy Spirit, 14 which is the guarantee of our inheritance until we acquire possession of it, to the praise of his glory.

1 Rejoice in the LORD, O you righteous! Praise befits the upright. 2 Praise the LORD with the lyre, make melody to him with the harp of ten strings! 4 For the word of the LORD is upright; and all his work is done in faithfulness. 5 He loves righteousness and justice; the earth is full of the steadfast love of the LORD. 12 Blessed is the nation whose God is the LORD, the people whom he has chosen as his heritage! 13 The LORD looks down from heaven, he sees all the sons of men.

1 In the meantime, when so many thousands of the multitude had gathered together that they trod upon one another, he began to say to his disciples first, “Beware of the leaven of the Pharisees, which is hypocrisy. 2 Nothing is covered up that will not be revealed, or hidden that will not be known. 3 Therefore whatever you have said in the dark shall be heard in the light, and what you have whispered in private rooms shall be proclaimed upon the housetops. 4 I tell you, my friends, do not fear those who kill the body, and after that have no more that they can do. 5 But I will warn you whom to fear: fear him who, after he has killed, has power to cast into hell; yes, I tell you, fear him! 6 Are not five sparrows sold for two pennies? And not one of them is forgotten before God. 7 Why, even the hairs of your head are all numbered. Fear not; you are of more value than many sparrows.”

Reflection for the day: “The sacred heart of Christ is an inexhaustible fountain and its sole desire is to pour itself out into the hearts of the humble so as to free them and prepare them to lead lives according to his good pleasure.” — St. Margaret Mary Alacoque