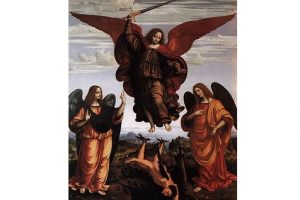 9 As I watched, Thrones were set up and the Ancient One took his throne. His clothing was snow bright, and the hair on his head as white as wool; His throne was flames of fire, with wheels of burning fire. 10 A surging stream of fire flowed out from where he sat; Thousands upon thousands were ministering to him, and myriads upon myriads attended him. The court was convened, and the books were opened. 13 As the visions during the night continued, I saw One like a son of man coming, on the clouds of heaven; When he reached the Ancient One and was presented before him, 14 He received dominion, glory, and kingship; nations and peoples of every language serve him. His dominion is an everlasting dominion that shall not be taken away, his kingship shall not be destroyed.

1 I give thee thanks, O LORD, with my whole heart; before the gods I sing thy praise; 2 I bow down toward thy holy temple and give thanks to thy name for thy steadfast love and thy faithfulness; for thou hast exalted above everything thy name and thy word. 3 On the day I called, thou didst answer me, my strength of soul thou didst increase. 4 All the kings of the earth shall praise thee, O LORD, for they have heard the words of thy mouth; 5 and they shall sing of the ways of the LORD, for great is the glory of the LORD.

47 Jesus saw Nathan’a-el coming to him, and said of him, “Behold, an Israelite indeed, in whom is no guile!” 48 Nathan’a-el said to him, “How do you know me?” Jesus answered him, “Before Philip called you, when you were under the fig tree, I saw you.” 49 Nathan’a-el answered him, “Rabbi, you are the Son of God! You are the King of Israel!” 50 Jesus answered him, “Because I said to you, I saw you under the fig tree, do you believe? You shall see greater things than these.” 51 And he said to him, “Truly, truly, I say to you, you will see heaven opened, and the angels of God ascending and descending upon the Son of man.”

Reflection for the day:

“God loves in the Seraphim, as charity,
knows in the Cherubim, as truth,
is seated in the Thrones, as equity,
reigns in the Dominions, as majesty,
rules in the Principalities, as principle,
guards in the Powers, as salvation,
acts in the Virtues, as strength,
reveals in the Archangels, as light,
assists in the Angels, as piety.” — St. Bernard