Wednesday of the 19th Week of Ordinary Time 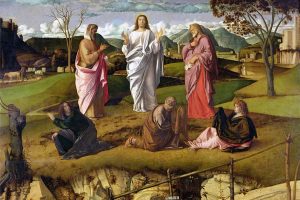 9:1 Then he cried in my ears with a loud voice, saying, “Draw near, you executioners of the city, each with his destroying weapon in his hand.” 2 And lo, six men came from the direction of the upper gate, which faces north, every man with his weapon for slaughter in his hand, and with them was a man clothed in linen, with a writing case at his side. And they went in and stood beside the bronze altar. 3 Now the glory of the God of Israel had gone up from the cherubim on which it rested to the threshold of the house; and he called to the man clothed in linen, who had the writing case at his side. 4 And the LORD said to him, “Go through the city, through Jerusalem, and put a mark upon the foreheads of the men who sigh and groan over all the abominations that are committed in it.” 5 And to the others he said in my hearing, “Pass through the city after him, and smite; your eye shall not spare, and you shall show no pity; 6 slay old men outright, young men and maidens, little children and women, but touch no one upon whom is the mark. And begin at my sanctuary.” So they began with the elders who were before the house. 7 Then he said to them, “Defile the house, and fill the courts with the slain. Go forth.” So they went forth, and smote in the city. 10:18 Then the glory of the LORD went forth from the threshold of the house, and stood over the cherubim. 19 And the cherubim lifted up their wings and mounted up from the earth in my sight as they went forth, with the wheels beside them; and they stood at the door of the east gate of the house of the LORD; and the glory of the God of Israel was over them. 20 These were the living creatures that I saw underneath the God of Israel by the river Chebar; and I knew that they were cherubim. 21 Each had four faces, and each four wings, and underneath their wings the semblance of human hands. 22 And as for the likeness of their faces, they were the very faces whose appearance I had seen by the river Chebar. They went every one straight forward.

15 “If your brother sins against you, go and tell him his fault, between you and him alone. If he listens to you, you have gained your brother. 16 But if he does not listen, take one or two others along with you, that every word may be confirmed by the evidence of two or three witnesses. 17 If he refuses to listen to them, tell it to the church; and if he refuses to listen even to the church, let him be to you as a Gentile and a tax collector. 18 Truly, I say to you, whatever you bind on earth shall be bound in heaven, and whatever you loose on earth shall be loosed in heaven. 19 Again I say to you, if two of you agree on earth about anything they ask, it will be done for them by my Father in heaven. 20 For where two or three are gathered in my name, there am I in the midst of them.”

Reflection for the day: “Consider the shortness of time, the length of eternity and reflect how everything here below comes to an end and passes by. Of what use is it, to lean upon, that which cannot give support?” — St. Gerard Majella