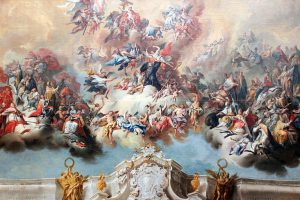 10 “For as the rain and the snow come down from heaven, and return not thither but water the earth, making it bring forth and sprout, giving seed to the sower and bread to the eater, 11 so shall my word be that goes forth from my mouth; it shall not return to me empty, but it shall accomplish that which I purpose, and prosper in the thing for which I sent it.”

9 Thou visitest the earth and waterest it, thou greatly enrichest it; the river of God is full of water; thou providest their grain, for so thou hast prepared it. 10 Thou waterest its furrows abundantly, settling its ridges, softening it with showers, and blessing its growth. 11 Thou crownest the year with thy bounty; the tracks of thy chariot drip with fatness. 12 The pastures of the wilderness drip, the hills gird themselves with joy, 13 the meadows clothe themselves with flocks, the valleys deck themselves with grain, they shout and sing together for joy.

18 I consider that the sufferings of this present time are not worth comparing with the glory that is to be revealed to us. 19 For the creation waits with eager longing for the revealing of the sons of God; 20 for the creation was subjected to futility, not of its own will but by the will of him who subjected it in hope; 21 because the creation itself will be set free from its bondage to decay and obtain the glorious liberty of the children of God. 22 We know that the whole creation has been groaning in travail together until now; 23 and not only the creation, but we ourselves, who have the first fruits of the Spirit, groan inwardly as we wait for adoption as sons, the redemption of our bodies.

1 That same day Jesus went out of the house and sat beside the sea. 2 And great crowds gathered about him, so that he got into a boat and sat there; and the whole crowd stood on the beach. 3 And he told them many things in parables, saying: “A sower went out to sow. 4 And as he sowed, some seeds fell along the path, and the birds came and devoured them. 5 Other seeds fell on rocky ground, where they had not much soil, and immediately they sprang up, since they had no depth of soil, 6 but when the sun rose they were scorched; and since they had no root they withered away. 7 Other seeds fell upon thorns, and the thorns grew up and choked them. 8 Other seeds fell on good soil and brought forth grain, some a hundredfold, some sixty, some thirty. 9 He who has ears, let him hear.” 10 Then the disciples came and said to him, “Why do you speak to them in parables?” 11 And he answered them, “To you it has been given to know the secrets of the kingdom of heaven, but to them it has not been given. 12 For to him who has will more be given, and he will have abundance; but from him who has not, even what he has will be taken away. 13 This is why I speak to them in parables, because seeing they do not see, and hearing they do not hear, nor do they understand. 14 With them indeed is fulfilled the prophecy of Isaiah which says: `You shall indeed hear but never understand, and you shall indeed see but never perceive. 15 For this people’s heart has grown dull, and their ears are heavy of hearing, and their eyes they have closed, lest they should perceive with their eyes, and hear with their ears, and understand with their heart, and turn for me to heal them.’ 16 But blessed are your eyes, for they see, and your ears, for they hear. 17 Truly, I say to you, many prophets and righteous men longed to see what you see, and did not see it, and to hear what you hear, and did not hear it. 18 Hear then the parable of the sower. 19 When any one hears the word of the kingdom and does not understand it, the evil one comes and snatches away what is sown in his heart; this is what was sown along the path. 20 As for what was sown on rocky ground, this is he who hears the word and immediately receives it with joy; 21 yet he has no root in himself, but endures for a while, and when tribulation or persecution arises on account of the word, immediately he falls away. 22 As for what was sown among thorns, this is he who hears the word, but the cares of the world and the delight in riches choke the word, and it proves unfruitful. 23 As for what was sown on good soil, this is he who hears the word and understands it; he indeed bears fruit, and yields, in one case a hundredfold, in another sixty, and in another thirty.”

Reflection for the day: “After the love which we Jesus Christ, we must give the chief place in our heart to the love of His Mother Mary.” – St. Alphonsus Ligouri