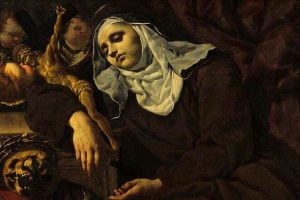 
1 While Apol’los was at Corinth, Paul passed through the upper country and came to Ephesus. There he found some disciples. 2 And he said to them, “Did you receive the Holy Spirit when you believed?” And they said, “No, we have never even heard that there is a Holy Spirit.” 3 And he said, “Into what then were you baptized?” They said, “Into John’s baptism.” 4 And Paul said, “John baptized with the baptism of repentance, telling the people to believe in the one who was to come after him, that is, Jesus.” 5 On hearing this, they were baptized in the name of the Lord Jesus. 6 And when Paul had laid his hands upon them, the Holy Spirit came on them; and they spoke with tongues and prophesied. 7 There were about twelve of them in all. 8 And he entered the synagogue and for three months spoke boldly, arguing and pleading about the kingdom of God.

Reflection for the day: “In beautiful things St. Francis saw Beauty itself, and through His vestiges imprinted on creation he followed his Beloved everywhere, making from all things a ladder by which he could climb up and embrace Him who is utterly desirable.” — St. Bonaventure