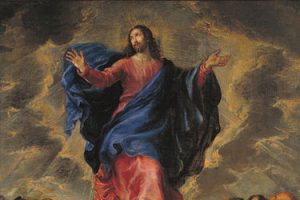 1 After this he left Athens and went to Corinth. 2 And he found a Jew named Aq’uila, a native of Pontus, lately come from Italy with his wife Priscilla, because Claudius had commanded all the Jews to leave Rome. And he went to see them; 3 and because he was of the same trade he stayed with them, and they worked, for by trade they were tentmakers. 4 And he argued in the synagogue every sabbath, and persuaded Jews and Greeks. 5 When Silas and Timothy arrived from Macedo’nia, Paul was occupied with preaching, testifying to the Jews that the Christ was Jesus. 6 And when they opposed and reviled him, he shook out his garments and said to them, “Your blood be upon your heads! I am innocent. From now on I will go to the Gentiles.” 7 And he left there and went to the house of a man named Titius Justus, a worshiper of God; his house was next door to the synagogue. 8 Crispus, the ruler of the synagogue, believed in the Lord, together with all his household; and many of the Corinthians hearing Paul believed and were baptized.

Reflection for the day:  “Out of compassion for us He descended from Heaven and although He ascended alone, we also ascend, because we are in Him by grace.” – St. Augustine