Memorial of St. Bernardine of Siena 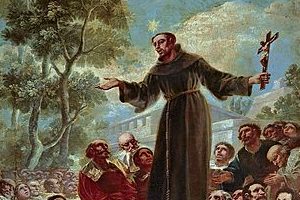 17:15 Those who conducted Paul brought him as far as Athens; and receiving a command for Silas and Timothy to come to him as soon as possible, they departed. 22 So Paul, standing in the middle of the Are-op’agus, said: “Men of Athens, I perceive that in every way you are very religious. 23 For as I passed along, and observed the objects of your worship, I found also an altar with this inscription, `To an unknown god.’ What therefore you worship as unknown, this I proclaim to you. 24 The God who made the world and everything in it, being Lord of heaven and earth, does not live in shrines made by man, 25 nor is he served by human hands, as though he needed anything, since he himself gives to all men life and breath and everything. 26 And he made from one every nation of men to live on all the face of the earth, having determined allotted periods and the boundaries of their habitation, 27 that they should seek God, in the hope that they might feel after him and find him. Yet he is not far from each one of us, 28 for `In him we live and move and have our being’; as even some of your poets have said, `For we are indeed his offspring.’ 29 Being then God’s offspring, we ought not to think that the Deity is like gold, or silver, or stone, a representation by the art and imagination of man. 30 The times of ignorance God overlooked, but now he commands all men everywhere to repent, 31 because he has fixed a day on which he will judge the world in righteousness by a man whom he has appointed, and of this he has given assurance to all men by raising him from the dead.” 32 Now when they heard of the resurrection of the dead, some mocked; but others said, “We will hear you again about this.” 33 So Paul went out from among them. 34 But some men joined him and believed, among them Dionys’ius the Are-op’agite and a woman named Dam’aris and others with them. 18:1 After this he left Athens and went to Corinth.

1 Praise the LORD! Praise the LORD from the heavens, praise him in the heights! 2 Praise him, all his angels, praise him, all his host! 11 Kings of the earth and all peoples, princes and all rulers of the earth! 12 Young men and maidens together, old men and children! 13 Let them praise the name of the LORD, for his name alone is exalted; his glory is above earth and heaven. 14 He has raised up a horn for his people, praise for all his saints, for the people of Israel who are near to him. Praise the LORD!

Reflection for the day:  “In the heart of Jesus, which was pierced, the kingdom of heaven and the land of earth are bound together. Here is for us the source of life. This heart is the heart of the Triune Divinity, and the center of all human hearts… It draws us to itself with secret power, it conceals us in itself in the Father’s bosom and floods us with the Holy Spirit. This heart, it beats for us in a small tabernacle where it remains mysteriously hidden in that still, white host.” — St. Edith Stein