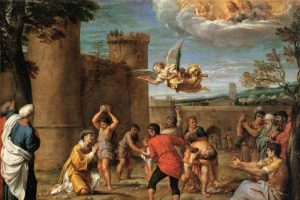 1 Now in these days when the disciples were increasing in number, the Hellenists murmured against the Hebrews because their widows were neglected in the daily distribution. 2 And the twelve summoned the body of the disciples and said, “It is not right that we should give up preaching the word of God to serve tables. 3 Therefore, brethren, pick out from among you seven men of good repute, full of the Spirit and of wisdom, whom we may appoint to this duty. 4 But we will devote ourselves to prayer and to the ministry of the word.” 5 And what they said pleased the whole multitude, and they chose Stephen, a man full of faith and of the Holy Spirit, and Philip, and Proch’orus, and Nica’nor, and Ti’mon, and Par’menas, and Nicola’us, a proselyte of Antioch. 6 These they set before the apostles, and they prayed and laid their hands upon them. 7 And the word of God increased; and the number of the disciples multiplied greatly in Jerusalem, and a great many of the priests were obedient to the faith.

1 Rejoice in the LORD, O you righteous! Praise befits the upright. 2 Praise the LORD with the lyre, make melody to him with the harp of ten strings! 4 For the word of the LORD is upright; and all his work is done in faithfulness. 5 He loves righteousness and justice; the earth is full of the steadfast love of the LORD. 18 Behold, the eye of the LORD is on those who fear him, on those who hope in his steadfast love, 19 that he may deliver their soul from death, and keep them alive in famine.

4 Come to him, to that living stone, rejected by men but in God’s sight chosen and precious; 5 and like living stones be yourselves built into a spiritual house, to be a holy priesthood, to offer spiritual sacrifices acceptable to God through Jesus Christ. 6 For it stands in scripture: “Behold, I am laying in Zion a stone, a cornerstone chosen and precious, and he who believes in him will not be put to shame.” 7 To you therefore who believe, he is precious, but for those who do not believe, “The very stone which the builders rejected has become the head of the corner,” 8 and “A stone that will make men stumble, a rock that will make them fall”; for they stumble because they disobey the word, as they were destined to do. 9 But you are a chosen race, a royal priesthood, a holy nation, God’s own people, that you may declare the wonderful deeds of him who called you out of darkness into his marvelous light.

1 “Let not your hearts be troubled; believe in God, believe also in me. 2 In my Father’s house are many rooms; if it were not so, would I have told you that I go to prepare a place for you? 3 And when I go and prepare a place for you, I will come again and will take you to myself, that where I am you may be also. 4 And you know the way where I am going.” 5 Thomas said to him, “Lord, we do not know where you are going; how can we know the way?” 6 Jesus said to him, “I am the way, and the truth, and the life; no one comes to the Father, but by me. 7 If you had known me, you would have known my Father also; henceforth you know him and have seen him.” 8 Philip said to him, “Lord, show us the Father, and we shall be satisfied.” 9 Jesus said to him, “Have I been with you so long, and yet you do not know me, Philip? He who has seen me has seen the Father; how can you say, `Show us the Father’? 10 Do you not believe that I am in the Father and the Father in me? The words that I say to you I do not speak on my own authority; but the Father who dwells in me does his works. 11 Believe me that I am in the Father and the Father in me; or else believe me for the sake of the works themselves. 12 “Truly, truly, I say to you, he who believes in me will also do the works that I do; and greater works than these will he do, because I go to the Father.”

Reflection for the day: “In ancient times, before the divine sojourn of the Saviour took place, even to the saints, death was terrible, all wept for the dead as though they perished. But now, that the Saviour has raised His body, death is no longer terrible, for all who believe in Christ, trample on it, as it were nothing and choose rather to die, than deny their faith in Christ. And that devil, that once maliciously exulted in death, now that its pains were loosed, remained the only one truly dead.” — St. Athanasius