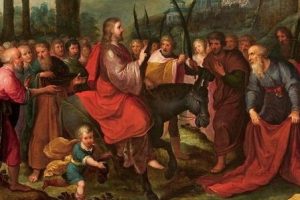 4 The Lord GOD has given me the tongue of those who are taught, that I may know how to sustain with a word him that is weary. Morning by morning he wakens, he wakens my ear to hear as those who are taught. 5 The Lord GOD has opened my ear, and I was not rebellious, I turned not backward. 6 I gave my back to the smiters, and my cheeks to those who pulled out the beard; I hid not my face from shame and spitting. 7 For the Lord GOD helps me; therefore I have not been confounded; therefore I have set my face like a flint, and I know that I shall not be put to shame.

7 All who see me mock at me, they make mouths at me, they wag their heads; 8 “He committed his cause to the LORD; let him deliver him, let him rescue him, for he delights in him!” 16 Yea, dogs are round about me; a company of evildoers encircle me; they have pierced my hands and feet — 17 I can count all my bones — they stare and gloat over me; 18 they divide my garments among them, and for my raiment they cast lots. 19 But thou, O LORD, be not far off! O thou my help, hasten to my aid! 22 I will tell of thy name to my brethren; in the midst of the congregation I will praise thee: 23 You who fear the LORD, praise him! all you sons of Jacob, glorify him, and stand in awe of him, all you sons of Israel!

Reflection for the day: “The tragedy of the passion brings to fulfilment our own life and the whole of human history. We can’t let Holy Week be just a kind of commemoration. It means contemplating the mystery of Jesus Christ as something which continues to work in our souls.” – St. Josemaria Escriva