Friday of the 6th Week in Ordinary Time 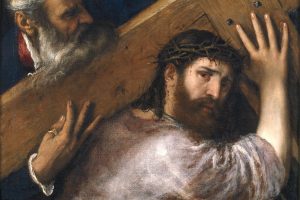 14 What does it profit, my brethren, if a man says he has faith but has not works? Can his faith save him? 15 If a brother or sister is ill-clad and in lack of daily food, 16 and one of you says to them, “Go in peace, be warmed and filled,” without giving them the things needed for the body, what does it profit? 17 So faith by itself, if it has no works, is dead. 18 But some one will say, “You have faith and I have works.” Show me your faith apart from your works, and I by my works will show you my faith. 19 You believe that God is one; you do well. Even the demons believe — and shudder. 20 Do you want to be shown, you shallow man, that faith apart from works is barren? 21 Was not Abraham our father justified by works, when he offered his son Isaac upon the altar? 22 You see that faith was active along with his works, and faith was completed by works, 23 and the scripture was fulfilled which says, “Abraham believed God, and it was reckoned to him as righteousness”; and he was called the friend of God. 24 You see that a man is justified by works and not by faith alone. 26 For as the body apart from the spirit is dead, so faith apart from works is dead.

1 Praise the LORD. Blessed is the man who fears the LORD, who greatly delights in his commandments! 2 His descendants will be mighty in the land; the generation of the upright will be blessed. 3 Wealth and riches are in his house; and his righteousness endures for ever. 4 Light rises in the darkness for the upright; the LORD is gracious, merciful, and righteous. 5 It is well with the man who deals generously and lends, who conducts his affairs with justice. 6 For the righteous will never be moved; he will be remembered for ever.

8:34 And he called to him the multitude with his disciples, and said to them, “If any man would come after me, let him deny himself and take up his cross and follow me. 35 For whoever would save his life will lose it; and whoever loses his life for my sake and the gospel’s will save it. 36 For what does it profit a man, to gain the whole world and forfeit his life? 37 For what can a man give in return for his life? 38 For whoever is ashamed of me and of my words in this adulterous and sinful generation, of him will the Son of man also be ashamed, when he comes in the glory of his Father with the holy angels.” 9:1 And he said to them, “Truly, I say to you, there are some standing here who will not taste death before they see that the kingdom of God has come with power.”