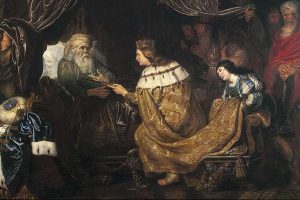 1 When David’s time to die drew near, he charged Solomon his son, saying, 2 “I am about to go the way of all the earth. Be strong, and show yourself a man, 3 and keep the charge of the LORD your God, walking in his ways and keeping his statutes, his commandments, his ordinances, and his testimonies, as it is written in the law of Moses, that you may prosper in all that you do and wherever you turn; 4 that the LORD may establish his word which he spoke concerning me, saying, `If your sons take heed to their way, to walk before me in faithfulness with all their heart and with all their soul, there shall not fail you a man on the throne of Israel.’ 10 Then David slept with his fathers, and was buried in the city of David. 11 And the time that David reigned over Israel was forty years; he reigned seven years in Hebron, and thirty-three years in Jerusalem. 12 So Solomon sat upon the throne of David his father; and his kingdom was firmly established.

10 Therefore David blessed the LORD in the presence of all the assembly; and David said: “Blessed art thou, O LORD, the God of Israel our father, for ever and ever. 11 Thine, O LORD, is the greatness, and the power, and the glory, and the victory, and the majesty; for all that is in the heavens and in the earth is thine; thine is the kingdom, O LORD, and thou art exalted as head above all. 12 Both riches and honor come from thee, and thou rulest over all. In thy hand are power and might; and in thy hand it is to make great and to give strength to all.

7 And he called to him the twelve, and began to send them out two by two, and gave them authority over the unclean spirits. 8 He charged them to take nothing for their journey except a staff; no bread, no bag, no money in their belts; 9 but to wear sandals and not put on two tunics. 10 And he said to them, “Where you enter a house, stay there until you leave the place. 11 And if any place will not receive you and they refuse to hear you, when you leave, shake off the dust that is on your feet for a testimony against them.” 12 So they went out and preached that men should repent. 13 And they cast out many demons, and anointed with oil many that were sick and healed them.

Reflection for the day: “Build an oratory within yourself, and there have Jesus on the altar of your heart. Speak to Him often while you are doing your work. Speak to Him of His holy love, of His holy sufferings and of the sorrows of most holy Mary.” — St. Paul of the Cross