Wednesday of the 3rd Week in Ordinary Time 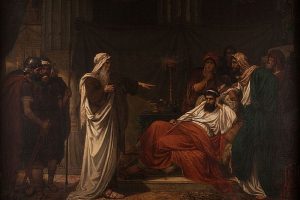 4 But that same night the word of the LORD came to Nathan, 5 “Go and tell my servant David, `Thus says the LORD: Would you build me a house to dwell in? 6 I have not dwelt in a house since the day I brought up the people of Israel from Egypt to this day, but I have been moving about in a tent for my dwelling. 7 In all places where I have moved with all the people of Israel, did I speak a word with any of the judges of Israel, whom I commanded to shepherd my people Israel, saying, “Why have you not built me a house of cedar?”‘ 8 Now therefore thus you shall say to my servant David, `Thus says the LORD of hosts, I took you from the pasture, from following the sheep, that you should be prince over my people Israel; 9 and I have been with you wherever you went, and have cut off all your enemies from before you; and I will make for you a great name, like the name of the great ones of the earth. 10 And I will appoint a place for my people Israel, and will plant them, that they may dwell in their own place, and be disturbed no more; and violent men shall afflict them no more, as formerly, 11 from the time that I appointed judges over my people Israel; and I will give you rest from all your enemies. Moreover the LORD declares to you that the LORD will make you a house. 12 When your days are fulfilled and you lie down with your fathers, I will raise up your offspring after you, who shall come forth from your body, and I will establish his kingdom. 13 He shall build a house for my name, and I will establish the throne of his kingdom for ever. 14 I will be his father, and he shall be my son. When he commits iniquity, I will chasten him with the rod of men, with the stripes of the sons of men; 15 but I will not take my steadfast love from him, as I took it from Saul, whom I put away from before you. 16 And your house and your kingdom shall be made sure for ever before me; your throne shall be established for ever.'” 17 In accordance with all these words, and in accordance with all this vision, Nathan spoke to David.

3 Thou hast said, “I have made a covenant with my chosen one, I have sworn to David my servant: 4 `I will establish your descendants for ever, and build your throne for all generations.'” [Selah] 26 He shall cry to me, “Thou art my Father, my God, and the Rock of my salvation.” 27 And I will make him the first-born, the highest of the kings of the earth. 28 My steadfast love I will keep for him for ever, and my covenant will stand firm for him. 29 I will establish his line for ever and his throne as the days of the heavens.

1 Again he began to teach beside the sea. And a very large crowd gathered about him, so that he got into a boat and sat in it on the sea; and the whole crowd was beside the sea on the land. 2 And he taught them many things in parables, and in his teaching he said to them: 3 “Listen! A sower went out to sow. 4 And as he sowed, some seed fell along the path, and the birds came and devoured it. 5 Other seed fell on rocky ground, where it had not much soil, and immediately it sprang up, since it had no depth of soil; 6 and when the sun rose it was scorched, and since it had no root it withered away. 7 Other seed fell among thorns and the thorns grew up and choked it, and it yielded no grain. 8 And other seeds fell into good soil and brought forth grain, growing up and increasing and yielding thirtyfold and sixtyfold and a hundredfold.” 9 And he said, “He who has ears to hear, let him hear.” 10 And when he was alone, those who were about him with the twelve asked him concerning the parables. 11 And he said to them, “To you has been given the secret of the kingdom of God, but for those outside everything is in parables; 12 so that they may indeed see but not perceive, and may indeed hear but not understand; lest they should turn again, and be forgiven.” 13 And he said to them, “Do you not understand this parable? How then will you understand all the parables? 14 The sower sows the word. 15 And these are the ones along the path, where the word is sown; when they hear, Satan immediately comes and takes away the word which is sown in them. 16 And these in like manner are the ones sown upon rocky ground, who, when they hear the word, immediately receive it with joy; 17 and they have no root in themselves, but endure for a while; then, when tribulation or persecution arises on account of the word, immediately they fall away. 18 And others are the ones sown among thorns; they are those who hear the word, 19 but the cares of the world, and the delight in riches, and the desire for other things, enter in and choke the word, and it proves unfruitful. 20 But those that were sown upon the good soil are the ones who hear the word and accept it and bear fruit, thirtyfold and sixtyfold and a hundredfold.”

Reflection for the day:  “We must pray incessantly for the gift of perseverance.” — St. Philip Neri