Monday of the 3rd Week in Ordinary Time 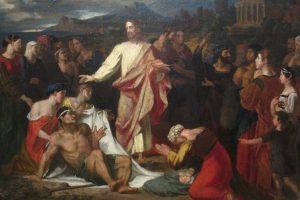 1 Then all the tribes of Israel came to David at Hebron, and said, “Behold, we are your bone and flesh. 2 In times past, when Saul was king over us, it was you that led out and brought in Israel; and the LORD said to you, `You shall be shepherd of my people Israel, and you shall be prince over Israel.'” 3 So all the elders of Israel came to the king at Hebron; and King David made a covenant with them at Hebron before the LORD, and they anointed David king over Israel. 4 David was thirty years old when he began to reign, and he reigned forty years. 5 At Hebron he reigned over Judah seven years and six months; and at Jerusalem he reigned over all Israel and Judah thirty-three years. 6 And the king and his men went to Jerusalem against the Jeb’usites, the inhabitants of the land, who said to David, “You will not come in here, but the blind and the lame will ward you off” — thinking, “David cannot come in here.” 7 Nevertheless David took the stronghold of Zion, that is, the city of David. 10 And David became greater and greater, for the LORD, the God of hosts, was with him.

19 Of old thou didst speak in a vision to thy faithful one, and say: “I have set the crown upon one who is mighty, I have exalted one chosen from the people. 20 I have found David, my servant; with my holy oil I have anointed him; 21 so that my hand shall ever abide with him, my arm also shall strengthen him. 24 My faithfulness and my steadfast love shall be with him, and in my name shall his horn be exalted. 25 I will set his hand on the sea and his right hand on the rivers.

22 And the scribes who came down from Jerusalem said, “He is possessed by Be-el’zebul, and by the prince of demons he casts out the demons.” 23 And he called them to him, and said to them in parables, “How can Satan cast out Satan? 24 If a kingdom is divided against itself, that kingdom cannot stand. 25 And if a house is divided against itself, that house will not be able to stand. 26 And if Satan has risen up against himself and is divided, he cannot stand, but is coming to an end. 27 But no one can enter a strong man’s house and plunder his goods, unless he first binds the strong man; then indeed he may plunder his house. 28 “Truly, I say to you, all sins will be forgiven the sons of men, and whatever blasphemies they utter; 29 but whoever blasphemes against the Holy Spirit never has forgiveness, but is guilty of an eternal sin” — 30 for they had said, “He has an unclean spirit.”

Reflection for the day: “He who is the beginning and the end, the ruler of the angels, made Himself obedient to human creatures. The creator of the heavens obeys a carpenter; the God of eternal glory listens to a poor virgin. Has anyone ever witnessed anything comparable to this? Let the philosopher no longer disdain from listening to the common labourer; the wise, to the simple; the educated, to the illiterate; a child of a prince, to a peasant.” — St. Anthony of Padua