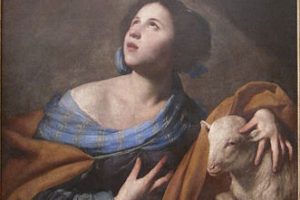 1 The LORD said to Samuel, “How long will you grieve over Saul, seeing I have rejected him from being king over Israel? Fill your horn with oil, and go; I will send you to Jesse the Bethlehemite, for I have provided for myself a king among his sons.” 2 And Samuel said, “How can I go? If Saul hears it, he will kill me.” And the LORD said, “Take a heifer with you, and say, `I have come to sacrifice to the LORD.’ 3 And invite Jesse to the sacrifice, and I will show you what you shall do; and you shall anoint for me him whom I name to you.” 4 Samuel did what the LORD commanded, and came to Bethlehem. The elders of the city came to meet him trembling, and said, “Do you come peaceably?” 5 And he said, “Peaceably; I have come to sacrifice to the LORD; consecrate yourselves, and come with me to the sacrifice.” And he consecrated Jesse and his sons, and invited them to the sacrifice. 6 When they came, he looked on Eli’ab and thought, “Surely the LORD’S anointed is before him.” 7 But the LORD said to Samuel, “Do not look on his appearance or on the height of his stature, because I have rejected him; for the LORD sees not as man sees; man looks on the outward appearance, but the LORD looks on the heart.” 8 Then Jesse called Abin’adab, and made him pass before Samuel. And he said, “Neither has the LORD chosen this one.” 9 Then Jesse made Shammah pass by. And he said, “Neither has the LORD chosen this one.” 10 And Jesse made seven of his sons pass before Samuel. And Samuel said to Jesse, “The LORD has not chosen these.” 11 And Samuel said to Jesse, “Are all your sons here?” And he said, “There remains yet the youngest, but behold, he is keeping the sheep.” And Samuel said to Jesse, “Send and fetch him; for we will not sit down till he comes here.” 12 And he sent, and brought him in. Now he was ruddy, and had beautiful eyes, and was handsome. And the LORD said, “Arise, anoint him; for this is he.” 13 Then Samuel took the horn of oil, and anointed him in the midst of his brothers; and the Spirit of the LORD came mightily upon David from that day forward. And Samuel rose up, and went to Ramah.

19 Of old thou didst speak in a vision to thy faithful one, and say: “I have set the crown upon one who is mighty, I have exalted one chosen from the people. 20 I have found David, my servant; with my holy oil I have anointed him; 21 so that my hand shall ever abide with him, my arm also shall strengthen him. 26 He shall cry to me, `Thou art my Father, my God, and the Rock of my salvation.’ 27 And I will make him the first-born, the highest of the kings of the earth.”

23 One sabbath he was going through the grainfields; and as they made their way his disciples began to pluck heads of grain. 24 And the Pharisees said to him, “Look, why are they doing what is not lawful on the sabbath?” 25 And he said to them, “Have you never read what David did, when he was in need and was hungry, he and those who were with him: 26 how he entered the house of God, when Abi’athar was high priest, and ate the bread of the Presence, which it is not lawful for any but the priests to eat, and also gave it to those who were with him?” 27 And he said to them, “The sabbath was made for man, not man for the sabbath; 28 so the Son of man is lord even of the sabbath.”

Reflection for the day: Obedience unites us so closely to God that in a way transforms us into Him, so that we have no other will but His. If obedience is lacking, even prayer cannot be pleasing to God.  – St. Thomas Aquinas