Monday of the 2nd Week in Ordinary Time 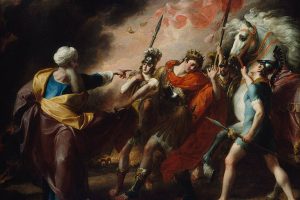 16 Then Samuel said to Saul, “Stop! I will tell you what the LORD said to me this night.” And he said to him, “Say on.” 17 And Samuel said, “Though you are little in your own eyes, are you not the head of the tribes of Israel? The LORD anointed you king over Israel. 18 And the LORD sent you on a mission, and said, `Go, utterly destroy the sinners, the Amal’ekites, and fight against them until they are consumed.’ 19 Why then did you not obey the voice of the LORD? Why did you swoop on the spoil, and do what was evil in the sight of the LORD?” 20 And Saul said to Samuel, “I have obeyed the voice of the LORD, I have gone on the mission on which the LORD sent me, I have brought Agag the king of Am’alek, and I have utterly destroyed the Amal’ekites. 21 But the people took of the spoil, sheep and oxen, the best of the things devoted to destruction, to sacrifice to the LORD your God in Gilgal.” 22 And Samuel said, “Has the LORD as great delight in burnt offerings and sacrifices, as in obeying the voice of the LORD? Behold, to obey is better than sacrifice, and to hearken than the fat of rams. 23 For rebellion is as the sin of divination, and stubbornness is as iniquity and idolatry. Because you have rejected the word of the LORD, he has also rejected you from being king.”

8 I do not reprove you for your sacrifices; your burnt offerings are continually before me. 9 I will accept no bull from your house, nor he-goat from your folds. 16 But to the wicked God says: “What right have you to recite my statutes, or take my covenant on your lips? 17 For you hate discipline, and you cast my words behind you. 21 These things you have done and I have been silent; you thought that I was one like yourself. But now I rebuke you, and lay the charge before you. 23 He who brings thanksgiving as his sacrifice honors me; to him who orders his way aright I will show the salvation of God!”

18 Now John’s disciples and the Pharisees were fasting; and people came and said to him, “Why do John’s disciples and the disciples of the Pharisees fast, but your disciples do not fast?” 19 And Jesus said to them, “Can the wedding guests fast while the bridegroom is with them? As long as they have the bridegroom with them, they cannot fast. 20 The days will come, when the bridegroom is taken away from them, and then they will fast in that day. 21 No one sews a piece of unshrunk cloth on an old garment; if he does, the patch tears away from it, the new from the old, and a worse tear is made. 22 And no one puts new wine into old wineskins; if he does, the wine will burst the skins, and the wine is lost, and so are the skins; but new wine is for fresh skins.”

Reflection for the day: “Obedience is a penance of reason, and, on that account, a sacrifice more acceptable than all corporal penances and mortifications.” — St. John of the Cross