Monday of the 4th Week of Advent 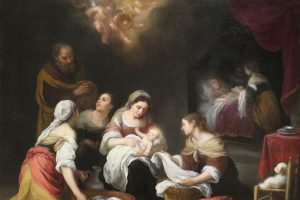 3:1 “Behold, I send my messenger to prepare the way before me, and the Lord whom you seek will suddenly come to his temple; the messenger of the covenant in whom you delight, behold, he is coming, says the LORD of hosts. 2 But who can endure the day of his coming, and who can stand when he appears? “For he is like a refiner’s fire and like fullers’ soap; 3 he will sit as a refiner and purifier of silver, and he will purify the sons of Levi and refine them like gold and silver, till they present right offerings to the LORD. 4 Then the offering of Judah and Jerusalem will be pleasing to the LORD as in the days of old and as in former years. 4:5 “Behold, I will send you Eli’jah the prophet before the great and terrible day of the LORD comes. 6 And he will turn the hearts of fathers to their children and the hearts of children to their fathers, lest I come and smite the land with a curse.”

4 Make me to know thy ways, O LORD; teach me thy paths. 5 Lead me in thy truth, and teach me, for thou art the God of my salvation; for thee I wait all the day long. 8 Good and upright is the LORD; therefore he instructs sinners in the way. 9 He leads the humble in what is right, and teaches the humble his way. 10 All the paths of the LORD are steadfast love and faithfulness, for those who keep his covenant and his testimonies. 14 The friendship of the LORD is for those who fear him, and he makes known to them his covenant.

57 Now the time came for Elizabeth to be delivered, and she gave birth to a son. 58 And her neighbors and kinsfolk heard that the Lord had shown great mercy to her, and they rejoiced with her. 59 And on the eighth day they came to circumcise the child; and they would have named him Zechari’ah after his father, 60 but his mother said, “Not so; he shall be called John.” 61 And they said to her, “None of your kindred is called by this name.” 62 And they made signs to his father, inquiring what he would have him called. 63 And he asked for a writing tablet, and wrote, “His name is John.” And they all marveled. 64 And immediately his mouth was opened and his tongue loosed, and he spoke, blessing God. 65 And fear came on all their neighbors. And all these things were talked about through all the hill country of Judea; 66 and all who heard them laid them up in their hearts, saying, “What then will this child be?” For the hand of the Lord was with him.