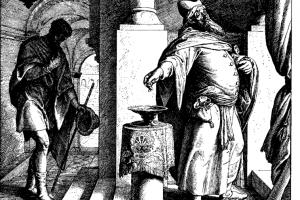 12 Do not offer him a bribe, for he will not accept it; and do not trust to an unrighteous sacrifice; for the Lord is the judge, and with him is no partiality. 13 He will not show partiality in the case of a poor man; and he will listen to the prayer of one who is wronged. 14 He will not ignore the supplication of the fatherless, nor the widow when she pours out her story. 16 He whose service is pleasing to the Lord will be accepted, and his prayer will reach to the clouds. 17 The prayer of the humble pierces the clouds, and he will not be consoled until it reaches the Lord; he will not desist until the Most High visits him, and does justice for the righteous, and executes judgment. 18 And the Lord will not delay, neither will he be patient with them, till he crushes the loins of the unmerciful and repays vengeance on the nations; till he takes away the multitude of the insolent, and breaks the scepters of the unrighteous.

6 For I am already on the point of being sacrificed; the time of my departure has come. 7 I have fought the good fight, I have finished the race, I have kept the faith. 8 Henceforth there is laid up for me the crown of righteousness, which the Lord, the righteous judge, will award to me on that Day, and not only to me but also to all who have loved his appearing. 16 At my first defense no one took my part; all deserted me. May it not be charged against them! 17 But the Lord stood by me and gave me strength to proclaim the message fully, that all the Gentiles might hear it. So I was rescued from the lion’s mouth. 18 The Lord will rescue me from every evil and save me for his heavenly kingdom. To him be the glory for ever and ever. Amen.

1 I will bless the LORD at all times; his praise shall continually be in my mouth. 2 My soul makes its boast in the LORD; let the afflicted hear and be glad. 16 The face of the LORD is against evildoers, to cut off the remembrance of them from the earth. 17 When the righteous cry for help, the LORD hears, and delivers them out of all their troubles. 18 The LORD is near to the brokenhearted, and saves the crushed in spirit. 22 The LORD redeems the life of his servants; none of those who take refuge in him will be condemned.

9 He also told this parable to some who trusted in themselves that they were righteous and despised others: 10 “Two men went up into the temple to pray, one a Pharisee and the other a tax collector. 11 The Pharisee stood and prayed thus with himself, `God, I thank thee that I am not like other men, extortioners, unjust, adulterers, or even like this tax collector. 12 I fast twice a week, I give tithes of all that I get.’ 13 But the tax collector, standing far off, would not even lift up his eyes to heaven, but beat his breast, saying, `God, be merciful to me a sinner!’ 14 I tell you, this man went down to his house justified rather than the other; for every one who exalts himself will be humbled, but he who humbles himself will be exalted.”

Reflection for the day: “Far better it is for you to say: ‘I am a sinner,’ than to say: ‘I have no need of religion.’ The empty can be filled, but the self-intoxicated have no room for God.” — Venerable Fulton Sheen