Saturday of the 29th Week in Ordinary Time 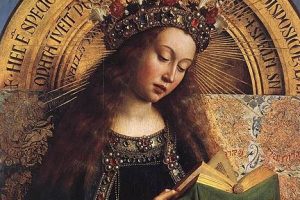 1 The earth is the LORD’s and the fulness thereof, the world and those who dwell therein; 2 for he has founded it upon the seas, and established it upon the rivers. 3 Who shall ascend the hill of the LORD? And who shall stand in his holy place? 4 He who has clean hands and a pure heart, who does not lift up his soul to what is false, and does not swear deceitfully. 5 He will receive blessing from the LORD, and vindication from the God of his salvation. 6 Such is the generation of those who seek him, who seek the face of the God of Jacob. [Selah]

Reflection for the day: “At Cana, [Mary] gave Him as a Savior to sinners; on the Cross He gave her as a refuge to sinners.” — Venerable Fulton Sheen