Memorial of St. Teresa of Avila 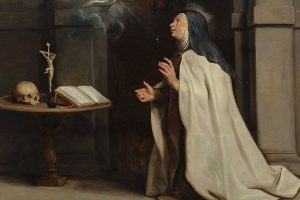 16 For I am not ashamed of the gospel: it is the power of God for salvation to every one who has faith, to the Jew first and also to the Greek. 17 For in it the righteousness of God is revealed through faith for faith; as it is written, “He who through faith is righteous shall live.” 18 For the wrath of God is revealed from heaven against all ungodliness and wickedness of men who by their wickedness suppress the truth. 19 For what can be known about God is plain to them, because God has shown it to them. 20 Ever since the creation of the world his invisible nature, namely, his eternal power and deity, has been clearly perceived in the things that have been made. So they are without excuse; 21 for although they knew God they did not honor him as God or give thanks to him, but they became futile in their thinking and their senseless minds were darkened. 22 Claiming to be wise, they became fools, 23 and exchanged the glory of the immortal God for images resembling mortal man or birds or animals or reptiles. 24 Therefore God gave them up in the lusts of their hearts to impurity, to the dishonoring of their bodies among themselves, 25 because they exchanged the truth about God for a lie and worshiped and served the creature rather than the Creator, who is blessed for ever! Amen.

1 The heavens are telling the glory of God; and the firmament proclaims his handiwork. 2 Day to day pours forth speech, and night to night declares knowledge. 3 There is no speech, nor are there words; their voice is not heard; 4 yet their voice goes out through all the earth, and their words to the end of the world. In them he has set a tent for the sun.

37 While he was speaking, a Pharisee asked him to dine with him; so he went in and sat at table. 38 The Pharisee was astonished to see that he did not first wash before dinner. 39 And the Lord said to him, “Now you Pharisees cleanse the outside of the cup and of the dish, but inside you are full of extortion and wickedness. 40 You fools! Did not he who made the outside make the inside also? 41 But give for alms those things which are within; and behold, everything is clean for you.”

Reflection for the day: “May today there be peace within. May you trust God that you are exactly where you are meant to be. May you not forget the infinite possibilities that are born of faith. May you use those gifts that you have received, and pass on the love that has been given to you. May you be content knowing you are a child of God. Let this presence settle into your bones, and allow your soul the freedom to sing, dance, praise and love. It is there for each and every one of us.” — St. Teresa of Avila