Memorial of St. Therese of Lisieux 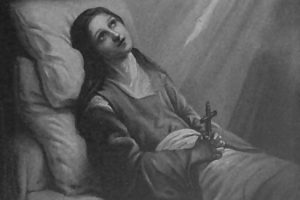 1 On the holy mount stands the city he founded; 2 the LORD loves the gates of Zion more than all the dwelling places of Jacob. 3 Glorious things are spoken of you, O city of God. [Selah] 4 Among those who know me I mention Rahab and Babylon; behold, Philistia and Tyre, with Ethiopia — “This one was born there,” they say. 5 And of Zion it shall be said, “This one and that one were born in her”; for the Most High himself will establish her. 6 The LORD records as he registers the peoples, “This one was born there.” [Selah] 7 Singers and dancers alike say, “All my springs are in you.”

51 When the days drew near for him to be received up, he set his face to go to Jerusalem. 52 And he sent messengers ahead of him, who went and entered a village of the Samaritans, to make ready for him; 53 but the people would not receive him, because his face was set toward Jerusalem. 54 And when his disciples James and John saw it, they said, “Lord, do you want us to bid fire come down from heaven and consume them?” 55 But he turned and rebuked them. 56 And they went on to another village.

Reflection for the day: “I love very much these prayers in common, for Jesus has promised to be in the midst of those who gather together in his name. I feel then that the fervor of my Sisters makes up for my lack of fervor; but when alone (I am ashamed to admit it) the recitation of the rosary is more difficult for me than the wearing of an instrument of penance. I feel I have said this so poorly! I force myself in vain to meditate on the mysteries of the rosary; I don’t succeed in fixing my mind on them. For a long time I was desolate about this lack of devotion which astonished me, for I love the Blessed Virgin so much that it should be easy for me to recite in her honor prayers which are so pleasing to her. Now I am less desolate; I think that the Queen of heaven, since she is my Mother, must see my good will and she is satisfied with it.” — St. Therese of Lisieux