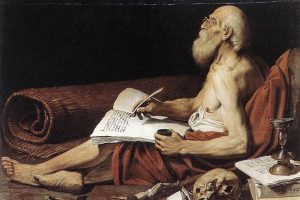 15 The nations will fear the name of the LORD, and all the kings of the earth thy glory. 16 For the LORD will build up Zion, he will appear in his glory; 17 he will regard the prayer of the destitute, and will not despise their supplication. 18 Let this be recorded for a generation to come, so that a people yet unborn may praise the LORD: 19 that he looked down from his holy height, from heaven the LORD looked at the earth, 20 to hear the groans of the prisoners, to set free those who were doomed to die; 21 that men may declare in Zion the name of the LORD, and in Jerusalem his praise, 22 when peoples gather together, and kingdoms, to worship the LORD. 28 The children of thy servants shall dwell secure; their posterity shall be established before thee.

46 And an argument arose among them as to which of them was the greatest. 47 But when Jesus perceived the thought of their hearts, he took a child and put him by his side, 48 and said to them, “Whoever receives this child in my name receives me, and whoever receives me receives him who sent me; for he who is least among you all is the one who is great.” 49 John answered, “Master, we saw a man casting out demons in your name, and we forbade him, because he does not follow with us.” 50 But Jesus said to him, “Do not forbid him; for he that is not against you is for you.”

Reflection for the day: “Ignorance of the Scriptures is ignorance of Christ.” — St. Jerome