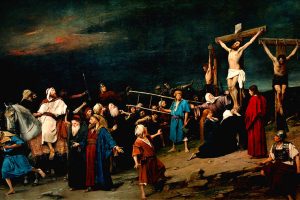 13 No one has ascended into heaven but he who descended from heaven, the Son of man. 14 And as Moses lifted up the serpent in the wilderness, so must the Son of man be lifted up, 15 that whoever believes in him may have eternal life. 16 For God so loved the world that he gave his only Son, that whoever believes in him should not perish but have eternal life. 17 For God sent the Son into the world, not to condemn the world, but that the world might be saved through him.

Reflection for the day: “A cross carried simply, and without those returns of self-love which exaggerate troubles, is no longer a cross. Peaceable suffering is no longer suffering. We complain of suffering! We should have much more reason to complain of not suffering, since nothing makes us more like Our Lord than carrying His Cross. Oh, what a beautiful union of the soul with Our Lord Jesus Christ by the love and the virtue of His Cross!” — St. John Vianney