Friday of the 20th Week in Ordinary Time 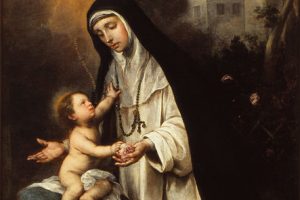 1 In the days when the judges ruled there was a famine in the land, and a certain man of Bethlehem in Judah went to sojourn in the country of Moab, he and his wife and his two sons. 3 But Elim’elech, the husband of Na’omi, died, and she was left with her two sons. 4 These took Moabite wives; the name of the one was Orpah and the name of the other Ruth. They lived there about ten years; 5 and both Mahlon and Chil’ion died, so that the woman was bereft of her two sons and her husband. 6 Then she started with her daughters-in-law to return from the country of Moab, for she had heard in the country of Moab that the LORD had visited his people and given them food. 14 Then they lifted up their voices and wept again; and Orpah kissed her mother-in-law, but Ruth clung to her. 15 And she said, “See, your sister-in-law has gone back to her people and to her gods; return after your sister-in-law.” 16 But Ruth said, “Entreat me not to leave you or to return from following you; for where you go I will go, and where you lodge I will lodge; your people shall be my people, and your God my God; 22 So Na’omi returned, and Ruth the Moabitess her daughter-in-law with her, who returned from the country of Moab. And they came to Bethlehem at the beginning of barley harvest.

4 When his breath departs he returns to his earth; on that very day his plans perish. 5 Happy is he whose help is the God of Jacob, whose hope is in the LORD his God, 6 who made heaven and earth, the sea, and all that is in them; who keeps faith for ever; 7 who executes justice for the oppressed; who gives food to the hungry. The LORD sets the prisoners free; 8 the LORD opens the eyes of the blind. The LORD lifts up those who are bowed down; the LORD loves the righteous. 9 The LORD watches over the sojourners, he upholds the widow and the fatherless; but the way of the wicked he brings to ruin.

Reflection for the day: “If only mortals would learn how great it is to possess divine grace, how beautiful, how noble, how precious. How many riches it hides within itself, how many joys and delights! No one would complain about his cross or about troubles that may happen to him, if he would come to know the scales on which they are weighed when they are distributed to men.” — St. Rose of Lima