Monday of the 20th Week in Ordinary Time 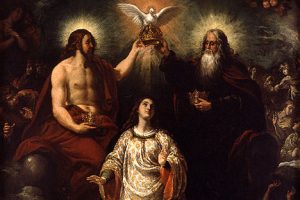 11 And the people of Israel did what was evil in the sight of the LORD and served the Ba’als; 12 and they forsook the LORD, the God of their fathers, who had brought them out of the land of Egypt; they went after other gods, from among the gods of the peoples who were round about them, and bowed down to them; and they provoked the LORD to anger. 13 They forsook the LORD, and served the Ba’als and the Ash’taroth. 14 So the anger of the LORD was kindled against Israel, and he gave them over to plunderers, who plundered them; and he sold them into the power of their enemies round about, so that they could no longer withstand their enemies. 15 Whenever they marched out, the hand of the LORD was against them for evil, as the LORD had warned, and as the LORD had sworn to them; and they were in sore straits. 16 Then the LORD raised up Judges, who saved them out of the power of those who plundered them. 17 And yet they did not listen to their Judges; for they played the harlot after other gods and bowed down to them; they soon turned aside from the way in which their fathers had walked, who had obeyed the commandments of the LORD, and they did not do so. 18 Whenever the LORD raised up Judges for them, the LORD was with the Judge, and he saved them from the hand of their enemies all the days of the Judge; for the LORD was moved to pity by their groaning because of those who afflicted and oppressed them. 19 But whenever the Judge died, they turned back and behaved worse than their fathers, going after other gods, serving them and bowing down to them; they did not drop any of their practices or their stubborn ways.

34 They did not destroy the peoples, as the LORD commanded them, 35 but they mingled with the nations and learned to do as they did. 36 They served their idols, which became a snare to them. 37 They sacrificed their sons and their daughters to the demons; 39 Thus they became unclean by their acts, and played the harlot in their doings. 40 Then the anger of the LORD was kindled against his people, and he abhorred his heritage; 43 Many times he delivered them, but they were rebellious in their purposes, and were brought low through their iniquity. 44 Nevertheless he regarded their distress, when he heard their cry.

Reflection for the day: “What does love look like? It has the hands to help others. It has the feet to hasten to the poor and needy. It has eyes to see misery and want. It has the ears to hear the sighs and sorrows of men. That is what love looks like.” — St. Augustine of Hippo