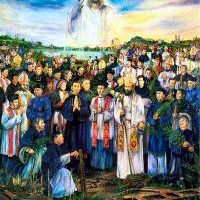 4These are the two olive trees and the two lampstands which stand before the Lord of the earth.5And if any one would harm them, fire pours out from their mouth and consumes their foes; if any one would harm them, thus he is doomed to be killed. 6They have power to shut the sky, that no rain may fall during the days of their prophesying, and they have power over the waters to turn them into blood, and to smite the earth with every plague, as often as they desire. 7And when they have finished their testimony, the beast that ascends from the bottomless pit will make war upon them and conquer them and kill them, 8and their dead bodies will lie in the street of the great city which is allegorically called Sodom and Egypt, where their Lord was crucified. 9For three days and a half men from the peoples and tribes and tongues and nations gaze at their dead bodies and refuse to let them be placed in a tomb, 10and those who dwell on the earth will rejoice over them and make merry and exchange presents, because these two prophets had been a torment to those who dwell on the earth. 11But after the three and a half days a breath of life from God entered them, and they stood up on their feet, and great fear fell on those who saw them. 12Then they heard a loud voice from heaven saying to them, “Come up hither!” And in the sight of their foes they went up to heaven in a cloud.

1Blessed be the LORD, my rock, who trains my hands for war, and my fingers for battle; 2my rock and my fortress, my stronghold and my deliverer, my shield and he in whom I take refuge, who subdues the peoples under him. 9I will sing a new song to thee, O God; upon a ten-stringed harp I will play to thee, 10who givest victory to kings, who rescuest David thy servant.

27There came to him some Sadducees, those who say that there is no resurrection, 28and they asked him a question, saying, “Teacher, Moses wrote for us that if a man’s brother dies, having a wife but no children, the man must take the wife and raise up children for his brother. 29Now there were seven brothers; the first took a wife, and died without children; 30and the second 31and the third took her, and likewise all seven left no children and died. 32Afterward the woman also died.33In the resurrection, therefore, whose wife will the woman be? For the seven had her as wife.”34And Jesus said to them, “The sons of this age marry and are given in marriage; 35but those who are accounted worthy to attain to that age and to the resurrection from the dead neither marry nor are given in marriage, 36for they cannot die any more, because they are equal to angels and are sons of God, being sons of the resurrection. 37But that the dead are raised, even Moses showed, in the passage about the bush, where he calls the Lord the God of Abraham and the God of Isaac and the God of Jacob. 38Now he is not God of the dead, but of the living; for all live to him.” 39And some of the scribes answered, “Teacher, you have spoken well.” 40For they no longer dared to ask him any question.

Reflection for the day: ” We must not be wise according to the flesh. Rather we must be simple, humble and pure.”-St. Francis of Assisi