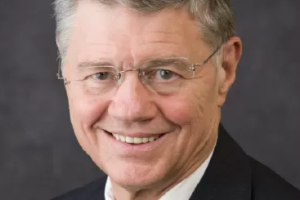 Father John Riccardo, who many of you may be familiar with from his radio program, Christ is the Answer, recently gave a talk to Legatus’ Ann Arbor Chapter. He used his father as an example for Legatus.

[Father John Riccardo’s father], also named John Riccardo, was the president and CEO of Chrysler Corp. Since stepping down from Chrysler, he has spent his retirement years using his considerable talents and experience to serve the Church in numerous ways.

I personally witnessed one example of this when I served on the board of Franciscan University of Steubenville with him. During that time, Mr. Riccardo spent many hours and countless trips between Detroit and Steubenville helping Franciscan miraculously dig out of the financial mess it was once in, enabling it to become the fine Catholic university it is today.

At our chapter meeting, Fr. Riccardo shared with us the following story about his dad:

“My dad had an experience while lying in a hospital after a heart attack in 1979, and a priest walking into his room and telling him, ‘When you die and you stand before the Lord, it won’t make one damn bit of difference whether or not you saved Chrysler.’ Upon reflection, my dad came to understand that perhaps the main reason he was able to hold the position he did career-wise was so that he could be a credible witness to his peers (and others) about Jesus. After all, he had the world by the tail. He didn’t need a ‘crutch,’ as some foolishly refer to faith.

“So it is with those in Legatus. This is rarified air. But are the men and women realizing that a platform has been given to them — not to socialize with others who also have so much (not that there’s anything wrong with that) — but so as to be influential in leading others to Jesus?

“God has given a stage to you. Yes, you have all cooperated with His gifts freely given and worked hard. But at the end of the day, it’s all made possible by Him. What are you doing with that stage?”

Father Riccardo’s message was truly inspired. I don’t think there was a member present who didn’t believe his message was for them personally. I believe this is a message for all of us in Legatus.  [and for all Catholic business professionals… —Catholic Business Journal editor note.]

Thomas “Tom” Monaghan is founder and chairman of Legatus, renown for his success at the helm of Domino’s Pizza for many years, former owner of the Detroit Tigers, and founder of Ave Maria University in Naples, Florida. Article reposted with permission from Legatus Magazine.