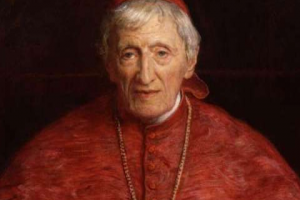 Saint Cardinal John Henry Newman gives us a wonderful Christmas reflection on the Shepherds, who where the first to whom the Birth of Our Saviour was announced on that history-changing night.

This great saint invites you and I to echo in our hearts what drew Our Lord to these shepherds in the first place—lowliness and humility—and to embrace and live what he taught them without words—profound and unmitigated joy.

Why should the heavenly hosts appear to these shepherds? What was it in them which attracted the attention of the Angels and the Lord of Angels? Were these shepherds learned, distinguished, or powerful? Were they especially known for piety and gifts?

… there is no reason to suppose that they were better than the common run of men in their circumstances, simple, and fearing God, but without any great advances in piety, or any very formed habits of religion.

Why then were they chosen? for their poverty’s sake and obscurity.

Almighty God looks with a sort of especial love, or (as we may term it) affection, upon the lowly … The shepherds, then, were chosen on account of their lowliness, to be the first to hear of the Lord’s nativity, a secret which none of the princes of this world knew …

To men so circumstanced the Angel appeared, to open their minds, and to teach them not to be downcast and in bondage because they were low in the world. He appeared as if to show them that God had chosen the poor in this world to be heirs of His kingdom, and so to do honour to their lot.

“Fear not,” he said, “for behold I bring you good tidings of great joy, which shall be to all people. For unto you is born this day in the city of David a Saviour, which is Christ the Lord.”

The Angel honoured a humble lot by his very appearing to the shepherds; next he taught it to be joyful by his message … “Fear not,” said the Angel, “for behold I bring you good tidings of great joy, which shall be to all people. For unto you is born this day in the city of David a Saviour, which is Christ the Lord.” …

Such were the words which the blessed Spirits who minister to Christ and His Saints, spoke on that gracious night to the shepherds, to rouse them out of their cold and famished mood into great joy; to teach them that they were objects of God’s love as much as the greatest of men on earth; nay more so, for to them first He had imparted the news of what that night was happening …

It is a day of joy: it is good to be joyful—it is wrong to be otherwise …

Let us seek the grace of a cheerful heart, an even temper, sweetness, gentleness, and brightness of mind, as walking in His light, and by His grace.

Let us pray Him to give us the spirit of ever-abundant, ever-springing love, which overpowers and sweeps away the vexations of life by its own richness and strength, and which above all things unites us to Him who is the fountain and the centre of all mercy, lovingkindness, and joy.

Selected quotes from St. Cardinal Newman culled from an article in Aletia: https://aleteia.org/2017/12/22/2-christmas-lessons-from-blessed-john-henry-newman/