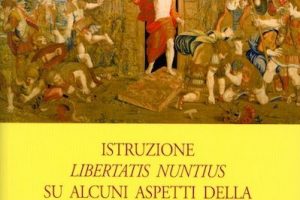 Vatican City, Dec 7, 2009 / 11:42 am (CNA).- In a meeting with a group of Brazilian bishops on Saturday, the Holy Father warned of the dangers of Marxist liberation theology and noted its grave consequences for ecclesial communities.

During the ad limina visit, the Pope recalled that “last August marked 25 years since the Instruction “Libertatis nuntius” of the Congregation for the Doctrine of the Faith, on certain aspects of liberation theology.  The document “highlights the danger involved in the uncritical absorption, by certain theologians, of theses and methodologies that come from Marxism.”

The Pope warned that the “more or less visible” scars of Marxist liberation theology, such as “rebellion, division, dissent, offenses, anarchy, are still being felt, causing great suffering and a grave loss of dynamic strength in your diocesan communities.”

For this reason, he exhorted all those who in some way feel attracted or affected by “certain deceitful principles of liberation theology” to re-visit the instruction and be open to the light that it can shed on the subject.

Benedict XVI also recalled that “the supreme rule of faith of the Church in effect arises from the unity that  the Spirit established between Sacred Tradition, Sacred Scripture and the Magisterium of the Church, in such reciprocity that they cannot subsist independently of each other,” as John Paul II explained in his encyclical Fides et Ratio.

The Instruction Libertatis nuntius was published on August 6, 1984, with the approval of Pope John Paul II, by the Congregation for the Doctrine of the Faith.

Its purpose was to focus the attention of pastors, theologians and all the faithful on the deviations of certain forms of liberation theology that are dangerous for the faith and for the Christian life and that are based on Marxist thought.

It warned that the grave ideological deviations of Marxist liberation theology inevitably lead to the betrayal of the cause of the poor and that a Marxist analysis of reality leads to the acceptance of positions that are incompatible with the Christian vision of man.