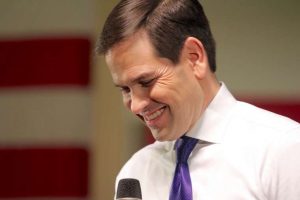 Kayne’s New Album and the Dignity of Work

“I don’t know if I like it or dislike it,” Sen. Marco Rubio (R-Fla.) told CNA of the track “Selah” on West’s highly-anticipated album “Jesus is King.” Rubio said the track was the only one he had listened to on the album as of Monday.

The Florida senator has often spoken publicly about his fondness for rap, previously professing a preference for the West Coast rappers of the 1990s in their musical feud with New York East Coast artists. In a 2012 interview, Rubio described Eminem as “the only guy that speaks at any sort of depth” in the genre.

“He’s a guy that does music that talks about the struggles of addiction and before that violence, with growing up in a broken family, not being a good enough father,” Rubio said of Eminem in 2012, while noting it was harder to find time to play rap music with a growing family of children around.

Returning to West’s new offering, Rubio told CNA that “he’s an interesting artist, and obviously someone who is going through a lot positively, and potentially, I don’t know, negatively as well,” Rubio said of West. “I don’t mean to be judgmental, he’s doing it in the public eye,” he said, “and it’s not the first time that he has religious themes in his music.”

“His faith is clearly something that calls to him, and obviously it’s a road he’s been on for a while and it’s interesting to see it cross over into his music,” Rubio said. “What’s most interesting, however, is to see the critical reaction to it.”

Rubio discussed the album with CNA, along with his vision for “common good economics” Nov. 4, ahead of a major speech on the same theme at the Catholic University of America on Tuesday morning.

The senator addressed students at Catholic University’s Busch School of Business on “common good capitalism” and the dignity of work, during a Vocation of Business Class taught by Professor Andreas Widmer.

Rubio said that profit making has been prioritized over the dignity of workers, with the result of many Americans being “left behind” in an economy that, overall, has grown in recent decades. He cited Pope Francis’ warning that “finance overwhelms the real economy” when profit is prioritized above all else.

“When an economy stops providing dignified work for millions of people,” he said, parents no longer have time for their children and resources to volunteer and contribute to their communities.

Furthermore, when men in particular do not have dignified work to provide for their families, he said, “the impact is corrosive and devastating.” He pointed to evidence in declines in rates of marriage, childbirth, and life expectancy, and corresponding increases in drug abuse, drug overdose and suicide.

Yet as a solution, “socialism would be far worse” than the current challenges of working families in the U.S., Rubio said.

Instead, he said, Catholics should look to “restore ‘common good capitalism’” where people have dignified work and businesses can make a profit, while reinvesting in the company.

Professor Andrew Abela, founding dean of the Busch School, agreed with the importance of Rubio drawing attention to those “left behind” in today’s economy. While the Busch School emphasizes “entrepreneurial capitalism” that exists “to serve others,” today’s “crony capitalism” promotes greed, selfishness, and a utilitarian view of workers, he said.

“The moment it’s cheaper to move to China, you’re gone,” he said of the view of workers by corporations under “crony capitalism.”

Rubio pitched specific policies as an antidote to today’s economy, including preferences in the tax code for job creation, families with children, and higher wages for workers rather than company stock buybacks.

Rubio also said the U.S. should look to invest in whole industries such as aerospace, telecommunications, transportation and housing, “to retrofit past engines of productivity” for the new economy, and also revamp the Small Business Administration.

The proposal to reenergize the Small Business Administration was “music to my ears,” Widmer told CNA, as his class seeks to form principled entrepreneurs who will create dignified jobs.

“We’re not the business school you go to, to become the next president of GE,” he said. “Here you come to run your family business.”

Immigrant Catholics have had a storied tradition of running small businesses in the U.S., he said. “The Catholics aren’t the Bill Gateses of the world. The Catholics are the dry cleaners and the lawn care companies and all of that kind of stuff,” he said.

“We have a finance department and all of that, but the majority of our students are people who will go back and run Main Street, not Wall Street and not Silicon Valley,” he said. 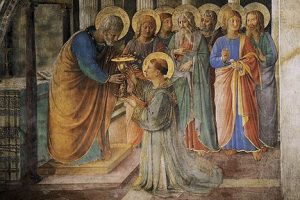 Saturday of the 2nd Week of Easter
Daily Mass Readings »