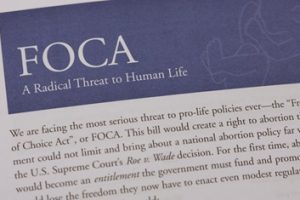 What is FOCA and Why Should I Care?

FOCA is an acronym for “Freedom of Choice Act,” a legislative bill reintroduced in the U.S. Senate by Senator Barbara Boxer (D, CA) and in the U.S. House of Representatives by Congressmen Jerrold Nadler (D, NY) the day after the U.S. Supreme Court upheld the ban on partial birth abortion (Partial Birth Abortion Ban Act, April 18, 2007).

Essentially, FOCA legislation would mandate that all restrictions on abortion be removed throughout the United States, regardless of any limitation currently approved by voters or legislators in individual states.  This means that any state, local or federal restrictions limiting abortion on demand —such as a state mandate that an abortion cannot be performed on a minor without parental consent, partial birth abortion ban, restrictions on taxpayer-funded elective abortions through Medicaid—would be null and void.

If FOCA is approved by the U.S. Senate and House, and if the President signs it into law (which President Obama has repeatedly indicated he will do), then unrestricted abortion on demand—including the legalization of partial birth abortion up to the day of birth, using taxpayer dollars to pay for abortion, and enabling a minor to have an abortion without parental consent, would be automatically mandated by U.S. law, no exceptions.

The U.S. Conference of Catholic Bishops, and many Catholic leaders have come out strongly against FOCA.

“FOCA would coerce all Americans into subsidizing and promoting abortion with their tax dollars,” explains Cardinal Justin Rigali, Archbishop of Philadelphia, “and FOCA would counteract any and all sincere efforts by government to reduce abortions in our country.”

So that you may be informed, actively inform others, pray with purpose and perhaps even fast regarding this critical issue that further endangers innocent life in the womb, some excellent resources are listed below.  Please add your insights and other resources in the comments section.